The “Owl” Ready for Competition

The Hooters Girl 2012, Veronica Chavarria, is about to take flight and represent the country in Miami. She won the ticket to be part of Miss Hooters Bikini Contest 2012 at the Fontainebleau. The most important thing that she won she said was a visa to the USA. 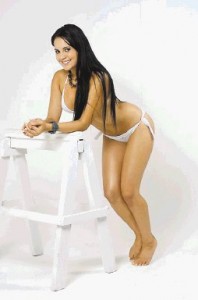 “It took two months, but I have the document. They hesitated at the U.S. Embassy, ​​because I’m from Perez Zeledon and the American who interviewed me said, ‘There are many people named Perez’ ” he said, laughing.

“I know it will be a beautiful experience, the idea is going to enjoy, learn and leave the name of the country up there,” said the 21 year old.

Chavarria said she was subjected to a strict diet and intense workouts in the gym. “I’m very greedy and I like sweets, but now none of that, only little salads”.

She said the restaurant will give you all the costumes you need. “In America I was given several bathing suits, but still I have to wear like an evening gown and cocktail dress,” she said.

Fine noted that the competition will be very hard, because girls are from about 100 locations around the world. “There are several steps that are rated, I must first make a video, a photo shoot, a dress parade and competition in a bathing suit.”

Do your self a favor young lady, Stay in the U.S.A. You will accomplish a lot more in the states and can forge a career while getting a first class eduaction. You wont get this opportunity again and you will be hard pressed to find an out in Costa Rica. Congrats to you and may all your endeavors be successful and beneficial to your life.

I agree, Your talents will be more appreciated there and have a better life. Jump ship after the competition and say adios to CR.