The Ongoing Strike in Costa Rica

Costa Rica News – Thousands marching in the streets. Flaming barricades. Clashes between demonstrators and riot police in darkened streets. A semi-truck hollowed out by fire.

Costa Rica has been rocked this week by the kind of protests rarely seen in the country in comparison with its more tumultuous Central American neighbors. It comes during a labor strike that went into its fifth day Friday with no apparent end in sight.

Spurred by calls from public sector unions, demonstrators protested again outside the presidential residence and blockaded roads in different parts of the country to demand President Carlos Alvarado scrap a proposed fiscal reform before congress that includes new taxes.

Costa Rica’s government is struggling with a deficit estimated at 7.1 percent of GDP this year, which has pushed up the public debt load and increased its need for revenue.

Alvarado is proposing to implement a value added tax to replace the existing sales tax and expand it to goods and services that are currently exempt. One of the most controversial measures is a 1 percent duty on basic foodstuffs.

Those and other changes that would limit unemployment assistance and the payment of some salary bonuses have met with vigorous opposition from public sector unions. Social security officials reported a daily staff absentee rate of 13 percent to 26 percent, causing dozens of surgeries to be postponed.

“Here are the people demanding no more taxes on the working class, no more burdens on workers,” said Melida Cedeno, president of the APSE teacher union. 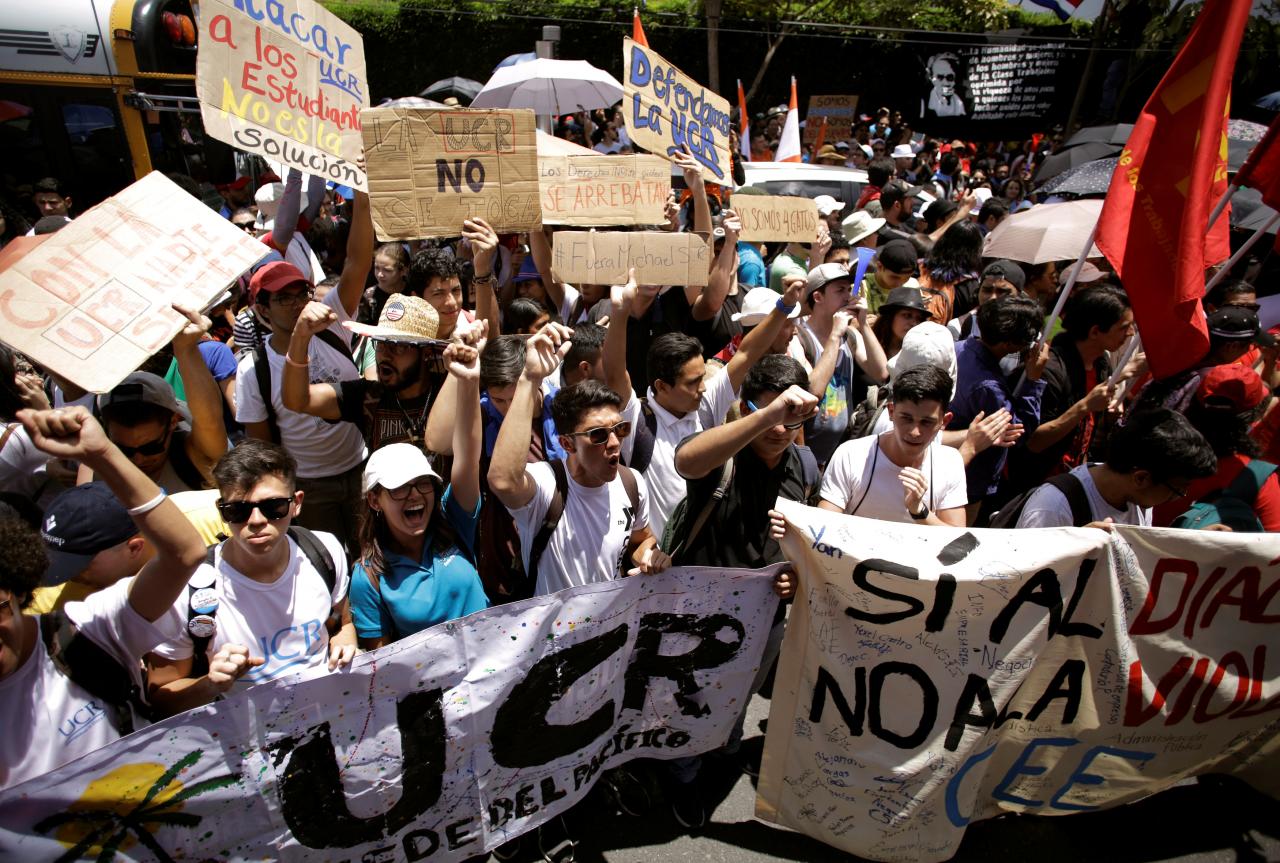 “This strike is indefinite,” she added, “and will end only when the government has the will to sit down at the table to talk with all the workers … and withdraw the proposed law.”

Ahead of the strike’s start Monday, Alvarado ordered police to reinforce ports and oil installations to keep protesters from disrupting commercial activity and fuel distribution.

In a televised address, he called the strike “illegal,” promised to guarantee public order and said the reforms are “the only way to avoid an imminent crisis. … Today their approval is not only necessary but also urgent.”

Protests intensified Wednesday with a mass rally of public employees who filled a main avenue in the capital, San Jose. The march ended outside the Legislative Assembly with some clashes between protesters and police.

There were reports of some injuries this week among protesters detained in clashes at a university, but none were said to be serious. In the Caribbean coastal province of Limon, a supermarket was sacked.

Authorities confirmed Friday that they were investigating the death of a 17-year-old in Limon as possibly related to the disturbances. The same day, roadblocks forced the suspension of the annual bearing of a torch to mark the eve of the country’s independence day.

Universities and Roman Catholic authorities have offered to mediate.

The unrest followed a bitterly disputed presidential election in April that has left a polarized electorate in its wake.

Political analyst Gustavo Araya said the strike represents a resurgence of activity for the unions, which enjoyed a close relationship with former President Luis Guillermo Solis during his 2014-2018 administration.

Araya added that labor is more skeptical of Alvarado for being in a coalition government and for having as his Cabinet chief Rodolfo Piza, who is considered a right-wing ideologue by union leaders.

Despite the pressure, the measure has advanced apace in the Legislative Assembly.

“The bill has resisted a week of strike, the motions continue to be processed quickly and there have been no signs of any willingness to negotiate,” Araya said. “Under this panorama I would expect one more week” of protests.

The Move Towards Technology in Costa Rica