The Materialistic Society of Costa Rica

Costa Rica News – It seems that Costa Rica is following in the footsteps of the USA in lots of ways. I went to a meeting yesterday to meet a Costa Rican female friend and a gringo guy that is a friend and business partner.  As we sat down we began joking about the Costa Rican culture and some of oddities we encounter each day. This is a common conversation among foreigners in Costa Rica, but we also had the Costa Rica side. 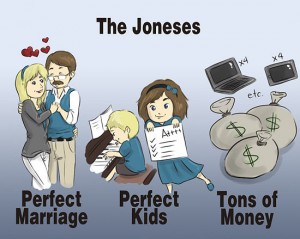 After hitting the topics of dating in Costa Rica and the fact that most families are very conservative, requiring the meeting of the family before dating a someone’s daughter……..we hit on the topic of money and materialism.

While venturing around Costa Rica you notice that there are a lot of people with expensive cars, wearing brand name clothes, have the latest technology and yet seem to always be broke.  The average salary in Costa Rica is about $800 a month for those with a college education.  As people have a professional job for an extended period of time they make $1,500.  If I was going to buy a flat screen TV or another heavily taxed import in Costa Rica it would be an extravagant purchase.

Where is this money coming from for these purchases?

Cars, all of which are imported, have an over a 30% tax rate on new vehicles and over 79% for older models.

Electronics are nearly double the price in Costa Rica as in the USA.

The answer came from the lips of my Tica friend……everything is on credit and nothing is really owned.

It is why you see the big screen TV at Walmart with the total price and then below it the option to pay $4 a week or $15 a month for like 2 years.  It is why there are such nice cars being driven as the drivers pay $100 to $200 a month for contracts of 10 years.

Families live in small houses with dirt floors with a $50,000 car outside and a 42 each TV on the wall.  Many of these families are basically paying their salaries to the bank as these high interest payments are made in order for Costa Ricans to keep up appearances.  It is more important for many Costa Ricans and people around the world to appear like they have money then it is to be able to support their basic needs.

Credit cards, car payments, loans on electronics are offered to the Costa Rican population and they are basing their self worth and image on how those around them see them.

Take a look around at some of the “metrosexual” tico guys that would rather spend money on clothes, jewelry  and cars than support their own children.  When the mother of their children asks for money, they see that payment as something that takes money away from their image and ability to sleep with more women.  In many cases these women because of the non -confrontational manner of Costa Ricans, they believe the continual lies about being able to get give money the next month and let them slide. Yet these same guys will buy their new girlfriends gifts to try to prove they have money.

Many Costa Rican women are not any different when it comes to the lust for exquisite gifts.  It is hard enough for a gringo to battle the stereotype that is that “they all want sex”. There is then the hurdle of having to show you can provide financially for them.

Our tica friend shared a story about a gringo friend she had that was interested in a Costa Rican woman.  The gringo had a lot of money but she told him to go on the date on a bus to see what kind of girl she was.  He showed up at her house on the bus and they took a cab on the date.  He then took the bus home at the end of the date.

Being that she knew the girl, she called her after the date and the only thing she said was that she was not interested because he did not have a nice car.

Our friend then told us this is very common and it is not even about if you have a car……it has to be a nice one for many women down here.

The Costa Rican population has mortgaged their entire lives in order to keep up with the Joneses. (Perhaps the phrase is different in Costa Rica) There is almost an entire society that is built on a credit system that is a house of cards.

The cost of living continues to increase. The governmental taxes are going up, The salaries for workers is not increasing by the same amount as the cost of living. The real estate prices continue to increase. What happens when that house of cards comes crashing down and those debts are called?

I guess the mentality in Costa Rica is “Pura Vida” and not to worry about tomorrow.

Jekyll and Hyde and Prehistoric People