Costa Rica News – Well is is one way to show that you have no faith or confidence in your own people.  President Chinchilla wants to get with a good face on this pre-election year and is seeking  an international consultant to help with her makeup.I have a feeling that the President could have found a Costa Rican to help her out with this task.  So her first step to try to improve her image is by saying that there is not a Costa Rican that has the skills to help her with her make-up. 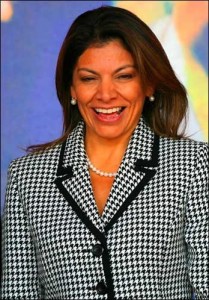 The president’s image adviser was first Florisabel Rodríguez. Less than a year in office and Chinchilla put this job into the hands of the Minister of Communications Roberto Gallardo.

A year later, she switched to Gallardo and installed in the post to her friend, then deputy, Francisco Chacon, who announced his goal of increasing the volume of official information.

He opened a place of “good news” called digital lanoticia.cr made all the Zapote building and created a state program in Channel 13, thanks to a team of communication increased in recent months. At least 13 professionals on the team in that area. So they started printing and broadcasting news that they put together themselves to try to change the minds of the government.

But it was still not enough. The popular image of the government still does not satisfy the President and is looking for solutions beyond borders.

This might be just a suggestion to Chinchilla and her band of bandits, perhaps if you were running the government correctly and did not allow corruption at every level then you would be seen as doing a better job.  Your image is bad because of your actions, if you would straighten up then maybe people would see you better.  This is one major characteristic of people in Costa Rica and around the world for that matter….unwilling to take responsibility for their actions.

The image of Chinchilla started strong in her administration, but in mid-2011 began to fall in and now more then half of the population called the government, “bad”.

Who pays for her hair straightening ?

What is the old saying… : “”Like Putting lips stick on a pig”” I am not saying she a pig.. Just make up does not change the character. I am amazed she would even have this out there in print.