The Incredible Wildlife of Costa Rica

Wildlife lover’s worldwide talk about Costa Rica because it has the highest density of biodiversity in the world! In only 1/3 of a percent of the Earth’s land you can find 4% of the species found on Earth. It’s home to 500,000 species! Because Costa Rica bridges together two continents it has this high variety of plants and animals. 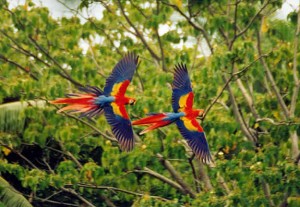 Costa Rica has 12 micro-climates including two ocean coastlines and rain, deciduous, and mangrove forests. There are endemic species (found only in Costa Rica) such as certain types of frogs, birds, and rodents, and butterflies. One interesting insect they have are sting-less bees! There are a number of notable animals and below you will find out about some of them.

There’s the Giant Toad which has been known to eat just about anything. It can even eat small mammals! An interesting fact about their wild eating habits is that they will even eat other smaller toads.

Not only is there one but there are nine non-marine mollusks in the country. The interesting thing about these small shelled animals is that they use organs for multiple purposes, attracting the attention of scientists. For example, the heart is used as three organs and is part of the reproductive, circulatory, and excretory systems.

Now for an animal you will be more familiar with: the butterfly. There are 1251 species of butterflies in this small country! Keep an eye out because these caterpillars and butterflies camouflage themselves as leaves or even bird droppings!

If you are lucky enough to spot a glass frog you may mistake it for a souvenir figurine that someone dropped-they really do look like a glass figure! If you approach it quietly you can see through its lime green translucent skin.

While you are here you should definitely take a tour through a rain forest or mangrove. Ask your guide to point out Costa Rica’s 4 species of monkeys and the national bird called Yiguirro.