The Growing Cult of Dzhokhar Tsarnaev

World News – It seems that all evil has followers.  Satan has them on earth and now even the Boston Bombing suspect Dzhokhar Tsarnaev has them.  Through the tragedy that happened it really brings to light how far this world has truly fallen. 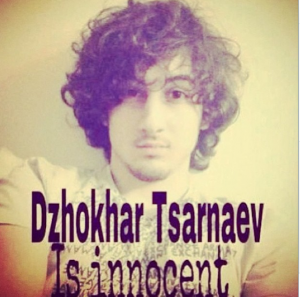 Barely two days after cops apprehended Suspect #2 in the Boston Marathon bombings, supporters of Dzhokhar Tsarnaev are rallying online. A flood of Twitter, Instagram and web postings are mirroring the crowdsourced effort to find the bomb culprit, except this time they’re out to exonerate him. Analysts of online extremism are watching closely to see if Tsarnaev becomes a cult figure.

The #freejahar hashtag on Twitter is about what you’d expect after the most highly publicized manhunt in the country. It’s a mix of conspiracy theories, sympathy for Tsarnaev and skepticism of the official narrative surrounding the 19-year-old’s arrest. Much of it is consumed with an effort to crowdsource Tsarnaev’s exoneration, pointing to photos from the scene and speculating about them — similar to what took place on 4chan and Reddit to hunt the bombing perpetrators.

“He’s fucking innocent. If he were ‘guilty’, it wouldn’t take this long to fucking prove it, and there would actually be evidence,” says one supporter, although the government has yet to charge the incapacitated, hospitalized Tsarnaev with a crime.

@J_Tsarsupport posted a photo (warning: graphic) claiming “proof that half the ‘victims’ are fake” based on a suspicion that there ought to be more blood. Links to conspiracy accusations on Infowars — which disrupted an FBI press conference on Thursday — proliferate. Photos circulate purporting to show, as with this one, that the backpack containing the bomb matches one carried by a different individual. “We The Private Eye have Proven Jhar innocent an soon he will publicly be innocent ..Keep up the great job campaigners,” tweeted another advocate using the hashtag #TroyCrossleyTruth. Compressing the cycle of accusation and refutation online, the hashtag is already getting trolled

Similar material is emerging on Instagram and the web. On the popular photo-sharing network, @Freejaharheda posts a tinted photo of Tsarnaev declaring his innocence; disbelievers “are NASA, GOVERMENT , CSI, NSI, ARMY etc. It is those who is dealing with satan.” A Change.org petition to President Obama starts out with the consensus petition that Tsarnaev, who has yet to be charged, receive a fair trial. Then it slips into more curious territory: “It is vital to end this persecution, as all the conflicting information shown by the media, and footage from the incident, seen by people from all corners of the world, doesn’t manifest itself as enough evidence to condemn Dzhokhar Tsarnaev of this heinous crime.”
Other postings display admiration for Tsarnaev with minimal explanation. @Sputnik51210 showed off her FREE JAHAR bracelet. Similarly, @Freejaharxo showed the same rallying cry, written on his or her arm in pink marker. Another guy wants to put it on a t-shirt.

Ironically, the pro-Tsarnaev hashtags contrast with a relative quiet and caution on known extremist message boards.

It is unknown what prompted the Boston attack. Despite rampant speculation that Suspect #1, Tamerlan Tsarnaev, committed the attack based on his extreme Islamist views, his younger brother Dzhokhar is barely beginning to recover from his wounds sufficiently to communicate with his investigators. That may be having a depressive effect on online-extremist cheering for Tsarnaev, according to the people who watch them closely.

“Right now, these online al-Qaida supporters are limiting themselves to celebrating the casualties and the attack generally, because the online crowd just doesn’t know the politics behind the attacks,” says Jarret Brachman, one of the leading researchers of online extremism. “At this point, it’s just the typical rallying around the death of Americans that they do any time Americans are killed in a catastrophic event.”

One post Brachman pointed to, on the password-protected Ansar al-Mujahideen English web forum, celebrated the discrepancy between the estimated economic damage the Boston bombers caused, relative to their presumed expenses. “It only got a handful of thank-yous though.”

Brachman and others believe that the unclear motivations of the bomb suspects place a damper on the online jihadi forums’ ability to claim Boston as a success. That’s despite the mystique of the young Tsarnaev nearly escaping a huge Friday manhunt; and, if he is proven to be one of the culprits, the ability to construct bombs that killed three and wounded over 180. But the U.S. government has to be similarly cautious about how to combat any popular mythos, like the hashtags, developing around Tsarnaev.

“We are dealing with conspiratorially minded individuals who don’t believe anything the government says anyway,” says Thomas Hegghammer, a terrorism researcher at Stanford University. “The simplest and most effective strategy is probably to highlight the suffering caused by the bombs. Let them see the injured women and children. The most hardcore extremists won’t care, but some fence-sitters might.”

That isn’t working for the Twitter hashtag, which is more likely to look at the bombing photos for evidence that Tsarnaev has been railroaded. Yet the pro-Tsarnaev Twitter and Instagram covens aren’t frequented, by and large, by people who celebrate the Boston bombings, a key distinction. And as the weeks and months ahead give way to assembling a legal case against Tsarnaev, Brachman thinks the government needs to be ultra-precise about its accusations in order not to give grist to the more-dangerous cohort.

“My advice is not to dribble out facts haphazardly but to work patiently and methodically through the facts of the case — avoid broad generalizations and vague descriptors,” Brachman says. “Complex timelines are far more accurate and difficult to spin than pithy labels. In short, don’t feed the online jihadist beast.”

Caribbean Looks to CR for Sustainability