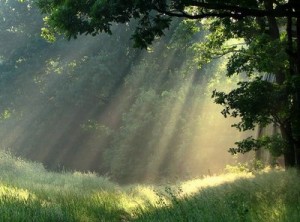 Most people believe in God in the abstract; atheists believe God is just an abstract. Agnostics hedge their bets, leaving open the possibility there is something beyond the human mind.

The case for God in any true and tangible sense is not helped when a cornerstone of Christianity, St. Augustine’s projected and nonsensical passage, “what do I love when I love my God,” is still cited as a testimony of the inward life.

Augustine voiced the classic Christian duality and mistaken division between the ‘mere’ senses (“not physical beauty nor temporal glory nor the brightness of light dear to earthly eyes”), with a supposedly higher plane and inner sight (“my soul is floodlit by light which space cannot contain, where there is sound that time cannot seize’).

Thus Christians came to equate the love of nature with some temporal, sensual and pagan thing. Their God is the Lord of suffering, Jesus on the Cross, a wrenching distillation of which I saw being worshipped in the last remaining functioning church in Moscow at the end of the communist era, in the winter of 1990.

I was raised Catholic at a time when the Mass was in Latin, when the purposefully mystifying rituals remained largely intact despite Vatican II. But by my mid-30’s the appeal of organized religion had become as incomprehensible to me as the appeal of communism. So it was ironic that I should catch a glimpse and gain an insight into its atavistic hold on the human mind and heart one sub-zero Sunday in Moscow when my hosts took me to see a Russian Orthodox service in full flower.

Incense wafted over the packed cathedral like a fragrant fog. Gregorian chanting reverberated off the walls. The church was lit with thousands of candles and filled with very demonstrably devout people (women were literally weeping in the aisles). This was an echo, times ten, of my Catholic boyhood serving High Mass at Easter with three priests and every kid they could put in a cassock.

For some reason Stalin had let this one church remain open, probably as some kind of living relic to that which he 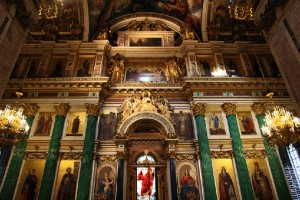 was convinced he had thoroughly snuffed out—‘religion, the opiate of the masses.’ But concentrated in that one place, devotion had only distilled piety down to its essence, unwittingly preserving it for the time when communism would inevitably fall, and the full panoply of the Russian Orthodox Church and State would rise again under Putin.

In what was still Leningrad, they took me to St. Isaac’s, which was empty not just of people, but even of pews. Having never been in a cathedral before, I was overwhelmed as leading lights of the city’s cultural elite ushered me in, chattering on through my interpreter in the same way they had on the tour of the Tsars’ summer palaces.

I stopped them and asked for a minute alone. Standing under the cavernous dome, gazing upon the bejeweled and gold-inlaid symbolism of windows and walls, I fleetingly had a similar sensation one gets standing on a peak in the Sierra Nevada. That sense of wonder and awe is what such buildings are meant to convey. From the inner and outer experiences of the churches in that strange land, I understood at an emotional level why men built such structures in mind and mortar. But I did not lose sight of the fact that they are still artifacts of man.

Like the 15th century classic, “The Imitation of Christ,” by Thomas à Kempis, cathedrals, scriptures and rituals are at best imitations of an actuality that no form, no word and no rite can touch. The need for intermediary, be it a priest or pastor, cathedral or scripture, is very strong in human nature. But it is essentially immature, and belongs to humankind’s childhood, especially since whatever meaning and resonance these things once had have lost all context and substance. 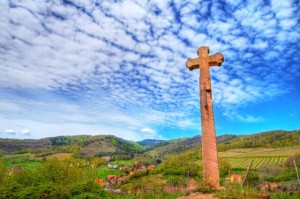 The fading echoes of Christianity in the West produce a strong vein of victimhood in religious believers in America today. Many Christians feel they are being besieged on all sides, not just by science and secularism, but by open hostility toward their beliefs.

They’re wrong. Most non-believers don’t give a hoot what churchgoers do in their homes and congregations. When agnostics, atheists and others such as myself (who have a strong spiritual life but find organized religion anathema), say that believers are “judgmental,” “hypocritical,” “old-fashioned” and “out of touch,” it is not out of hostility, but because they usually are.

The essence, totality and infinite sublimity we call God has nothing to with the things of man, and the things of man, including and especially the dead accretions of religion, must be set aside completely for even an intimation of the sacred to be seen and felt. That’s especially true at a time of widespread corruption and collapse such as we now live.

Nature is the true and imperishable echo of God, for even if man destroys the earth and himself, that which inseparably gave rise to the capacity for the sacred in the human species, that which is immanent in nature, is indestructible and ever new.

The mind of God requires the brain of a fully sentient creature to be aware of it. Not even elephants and Orcas contemplate creation. But if a sentient species with such capacity persists to the bitter end in the destructiveness of its divisions and beliefs, the Universe, and the Intelligence within and beyond it, sheds a tear and moves on.

This may not be the last chance for humankind to change course, but if we’re not to risk falling into the man-made abyss into which so many young men in America, stripped of meaning and context and offered only meds, have fallen, we have to presume it is.