Sports News – Although this weekend includes some pretty big events like the 2013 Preakness, the 2013 lacrosse national championship tournament, and both NBA and NHL playoff series…..is it ever really too early to talk football? Most of us out there are just counting the days until college and then NFL football starts its games. 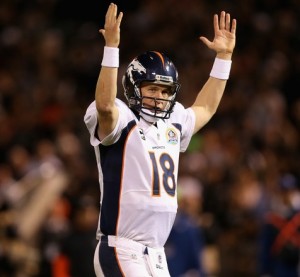 Every offseason, NFL fans and bettors come with the same exact question: Who’s going to win next Super Bowl? Now, football bettors know how hard is to predict an accurate outcome, but that doesn’t seem to stop thousands of sportsbook betting fans from trying.

Just a few days ago, the NFL ended its popular “Predict the Season” contest hosted every year, and after three long of voting, fans came with two early Super Bowl favorites: Denver and Seattle. According to the numbers released by the NFL, voters picked the Broncos over the New England Patriots in the AFC title game and the Seahawks over the San Francisco 49ers in an NFC championship. Broncos got a total of 44,362 votes; however, the team was surpassed by the Seahawks by approximately 7.000 votes (51,803 votes).

Despite how useless the fan opinion could be, the truth is that their prediction isn’t that far from what oddsmakers are predicting for the next season.  Just days after the 2013 NFL Draft came to an end, the odds to win the 2014 Super Bowl XLVIII had the San Francisco 49ers and Denver Broncos as the Top two title contenders for next NFL championship.

Same as San Francisco and the always favorite New England Patriots, the Seahawks and Broncos are catching the attention of fans and oddsmakers. Both teams show listed among the Top 5 Teams to Win Super Bowl XLVIII according to oddsmakers. The Broncos and Patriots are tied in third place to win the title at +600. The Seattle Seahawks, who opened at 12-to-1 to win the Super Bowl, show listed at +800. But according to oddsmakers, the 49ers are the top contender this season. Future NFL odds are led by the 49ers, listed at +500 to win Super Bowl XLVIII.

The 2013 NFL Season is scheduled to kick off on Thursday, September 5th with a special game pitting the current NFL champs, the Baltimore Ravens and the Denver Broncos in a rematch of a 2012 Divisional Round playoff game. Conference rivals, Seahawks and Niners are programmed to meet twice this season, with the first game set to take place on September 15th at CenturyLink Field (Week 2) and Game 2 set for December 8th at Candlestick Park (Week 14).

Bettors looking ahead to Super Bowl XLVIII can join the action and take advantage of the early odds on NFL provided by Sports Betting Online.  Sign Up Now for a free account and get full 10% cash-back credit for your weekly wins or loses deposited to your account every Monday.