The Diabolical Resides on Effie Street

Ghosts & The Supernatural – I’m going to talk about two experiences in my life that have left an impression with me throughout my whole life. The first one is the experience of living in a haunted house, this story is entitled The Diabolical Resides on Effie Street. This is what lead me to become a paranormal investigator. The other story, I talk about my days as a firefighter and why I thought that fire was a living entity. These are two experiences that will haunt me for the rest of my life. Now let’s start with what happened on Effie Street, read on.

One of the questions I get the most is…”why did you become a paranormal investigator?” Well, it all started when I was a little boy living on Effie Street in Fresno, California. The year was 1962. We lived in an old duplex on Effie Street, it was a corner house. I experienced horrible things at this house. I will describe the paranormal horrors that occurred in order as they happened.

1. The first experience I had at this home was hearing a woman’s serene voice calling for me. She was saying…”Dale, come here.” She was saying this over and over again. All my life, my parents would call me by my middle name Dale. This female spirit was also calling me Dale. I went towards her voice and looked out a window that allows me to see an orange grove. The voice was coming from the orange grove. I could not see the woman and got scared and ran to my mother.

2. I was riding my tricycle down the street. I stayed on the sidewalk and went about 6 houses up the road. I stopped at one house and looked at the front door. A man steps out to the porch looks at me and draws a shotgun on me. I got scared and went home as quickly as possible. I told my dad and my dad went up to the house and it was discovered that no one lived there.

3. On one night I heard the sound of something rolling on the sidewalk, this sound was at a distance. The sound kept getting closer and closer. Finally the sound was right at my bedroom window and it stopped. My bedroom window opened up half way on it’s own. I looked towards the window and saw a black tea kettle with 4 rollers on the bottom of it. The black tea kettle had a snout and the snout slowly turned towards me and a spray came out. I was covered in the spray and started hacking and coughing. The very next day I had a bad case of bronchitis.

5. I was so scared of all the things that were happening to me, I started carrying a bible with me all the time. I went to the neighbor’s dog that was friendly with everyone and started petting him. All of sudden the dog’s features changed and from a friendly dog, he became a vicious dog and severely bit me in the hand. I was bleeding all over the place. I ran from the neighbor’s house through the orange grove to get to my house. While running through the orange grove, I could hear the sound of a woman maniacally laughing.

6. On another night, the winged skeleton heads came back in my room and I yelled and started hacking and coughing. My mother came in half asleep and gave me a teaspoon of poison. She thought she was giving me cough syrup and had me throw it up. It scared her to death, she thought she had poisoned me.

7. The final incident I was walking in the living room and something came up behind me and pushed me into the heater hard. I had burn marks all over my legs from this incident.

My dad received a promotion and before I knew it, we were moving out of the home on Effie Street and moving into a home on Simpson Avenue in Fresno. The incidents stopped. As I got older, I wondered if I experienced childhood night terrors or actually experienced the paranormal. I started reading everything on the paranormal and read many Brad Steiger books. Little did I know that the knowledge I would gain from Brad Steiger’s books would eventually help me become a successful paranormal investigator.

In 1977, I became a firefighter with the California Division of Forestry (which is now called Cal-Fire). I spent a lot of time training and only fought one fire in the Sierra Mountains. Talking with many of the seasoned firefighters, I learned that many believed that a fire is a type of life force. Fires have the quality of life, they can reproduce, they consume (eat), they grow, they deposit waste, they breathe oxygen. Biologists have actually looked into this theory that fire could be a living entity. Most biologists scoff at the idea that fire can be a living organism, because fire does not have cells. Other scientists make claim that not all living organisms must have cells to be considered a living entity. There could be living intelligent entities that are made up of pure energy. A person on the quantum level is made up of atoms, protons, etc. Atoms and protons are a form of energy. If the soul exists, the soul according to many cultures carries the make-up of our living selves. 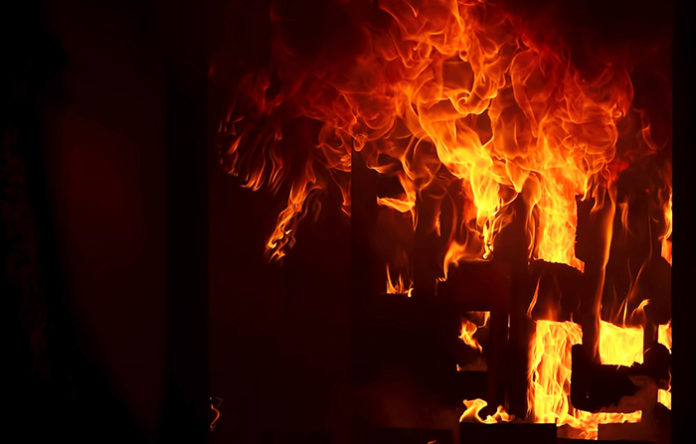 The soul may contain our knowledge that we gathered as living human beings and may be able to manifest and when the soul manifests, people say they saw a ghost. Fire is a form of energy, so therefore, fire can be a type of living creature in pure energy form. Many firefighters that I talked to, believed that fire in survival mode, would appear to have intelligence. Fires would seem to have a mind of its own and jump from one tree to another, to escape the wraith of a firefighter. In the true story “Only the Brave” the main firefighter looks upon the fire and verbally challenges it. This movie is based on the true life experiences of the Granite Mountain Hotshots in the Yarnell Hill Fire. Most firefighters that I knew, would talk to a fire as if it was a living thing, of course they would use a few choice words.

My experience in fighting a major fire in the Sierra Mountains is that when I reached the area from our Colfax station, I was amazed on how huge this fire was. The smoke was in the shape of a mushroom cloud. It looked like a nuclear bomb had went off in the mountains. My first assignment was to put out a spot fire. My Captain was yelling at me to distinguish this fire before it became bigger and start consuming an area that we wanted to be in control of. As I tried to put out this spot fire, it seemed to move intelligently. Wherever I went, it seemed to go around me and actually leap from one spot to another spot, as if it wanted to survive. The Captain was yelling at me to get into the xxx damn roots of the fire! As I got closer, I could feel my hair singe and felt the heat on my cheeks. I yelled at the fire to stay put as I tried to extinguish this spot fire. The sound of the fire sounded like maniacal laughter as if it was mocking me. Before I knew it, it jumped behind me and in a matter of seconds there was a wall of flame 20 feet high behind me. I panicked and threw down the water hose and the water hose flew all over. I scrambled to the fire truck, sat on top of it with my arms crossed over each other. I wasn’t bulging from the fire truck. The Captain looked at me and said “get off the xxx damn truck!” I looked at the Captain and gave him my middle finger and said…”F you, I quit!” When I got back to the station the Captain was very nice to me and said…”Paul, being a firefighter is not cut out for everyone, I understand if you are quitting.” That was my first fire I fought and the last fire I ever fought and to this day, I believe the fire I was fighting was a living entity and had a mind of its own. With the unnatural behavior of the fire, I consider this experience as being paranormal, it definitely was not “normal”.

Why The Costa Rica Crocodiles Should Not Be Fed