The Cosmic Contradiction of Man

“The Omega point is a term used by Pierre Teilhard de Chardin to describe the goal towards which consciousness supposedly evolves. He believed evolution was in a process converging in man toward a final unity. Teleology notwithstanding, where man is concerned, Teilhard got it backasswards. 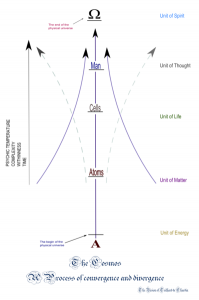 The question to which neither Western nor Eastern philosophy has been able to give an adequate explanation is this: Given that nature unfolds in a dynamic and holistic order, and humans evolved along with all other creatures on earth, how and why did man become such a factor of fragmentation and disorder on this planet?

Nearly all explanations for ‘the riddle of man’ suffer from enslavement to the idea of progress, including Teilhard de Chardin’s and his ‘Omega Point.” Besides continuing with an anthropocentric view of humankind’s place in evolution (keeping man at the center of the picture) de Chardin made the mistake of assuming evolution is progressive.

In point of fact, man represents an increasing crisis not only for our species, but also for countless other species on this planet, which our species is currently decimating in “the Sixth Extinction.” (All five previous mass extinctions were caused by natural events, like asteroids, rather than a sentient species that gave itself the misnomer Homo sapiens, wise man.)

Given the capability of one species to bring about such an event, the evolution of man poses as yet virtually unaddressed questions for religious philosophers. Of course, if one assumes that the universe is simply a mechanism plus chance, and that consciousness is merely and purely what we have as thought and knowledge, then there is no problem, except how to deaden your heart against what humans are doing to the earth and each other.

But there’s an actuality to my mind (at least when it’s completely quiet), an inseparable and unknowable (literally, in the context of knowledge and the known) of order, intelligence, and sacredness that permeates nature and the universe. Denied by atheists and many scientists on one hand, this actuality is also derided by religionists on the other, who categorize such expressions as pantheism and panentheism.

Nevertheless, the nameless (the world ‘God’ is too fraught, for God is neither the Creator or Observer) is available to every human being that ends the observer and time in complete, undirected attention. Passive watchfulness, especially in the mirror of nature, initiates the movement of negation and ushers in a profound stillness of mind. One lets go of the known and enters a state of being rather than becoming. 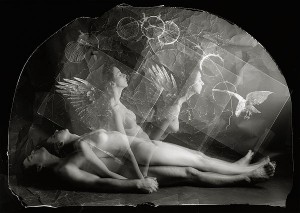 supremely beautiful planet in a cosmos of infinite, dynamic order. Add to that the universality of mystical experiencing across time and cultures, and de Chardin did not even come close to resolving the riddle of man.

Evolution has an intrinsic drive toward ‘higher consciousness,’ but it hits a big bump in the road with the evolution of ‘higher thought.’ So conscious thought is both a necessary precondition for cosmic awareness, and the greatest impediment to it.

That is, on one hand the brain on a given planet (reptilian-mammalian-hominid on earth) obviously has to reach a certain level of complexity before a state of insight (as opposed to insights) is possible. But on the other hand, the very threshold that enables the awakening of spiritual insight tends to produce not only higher and higher levels of scientific discovery and technological innovation, but increasing degrees of fragmentation, conflict, and darkness.

The insight that the separative mechanism of ‘higher thought’ carries with it the strong tendency to fragment the planet on which the adaptive leap evolved (since thought is inherently a separative mechanism, spilling over as division into the psychological and social dimensions) solves one aspect of the riddle, but it highlights another.

There is awareness as cosmic consciousness, in itself and potentially for the human brain. And there is an intrinsic drive in evolution toward it. Then what conscious transmutation is required in a sentient species to turn the self-made 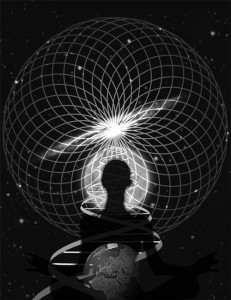 impediment of symbolic thought into awakening before it’s too late?

When one really touches upon the immense mystery that thought is both a prerequisite and an obstacle to cosmic consciousness, one feels the compassion of the cosmos for creatures such as us. As difficult as it often is to feel and act from that, the Buddhists are correct in saying that compassion is the key.

Far from putting man at the center, this ‘theory of human nature’ provides both a religiously compatible and scientifically testable hypothesis, even if it takes a thousand years. Namely, that everywhere life evolves to the point of sentience (defined as conscious of its own consciousness, with the capability of science), the creature possessing the potential for sapience passes through a crisis of fragmentation similar to what is presently coming to a head on earth.

There’s a mathematical elegance to the insight that ‘higher thought’ is both a prerequisite and an obstacle to full consciousness. The dilemma begins to resolve (and dissolve) in the very comprehension of and compassion for it. Of course, this implies that there will be a turning point for us, when the transmutation of humankind will end the rampant division, conflict, and darkness we are still generating unabated due to the unwise use of ‘higher thought.’

In this view, unlike de Chardin’s, spiritual progress is not only illusory, it occurs in reverse. Creatures like man do not ‘evolve,’ but intensify in their evolutionary contradiction until the crisis of consciousness is resolved one way or another.

That is, symbol-making creatures such as us generate more and more fragmentation on their planets until they (the planet and the symbol-making creature) can’t take anymore. Then they radically change, or they perish. Since extinction, from our point of view, isn’t an option, and since understanding the “riddle of man” is part of resolving the crisis of thought, the question is, can humankind make the turn before destroying the earth and our spiritual potential?

There is a tragic irony in Teilhard de Chardin saying, “The Age of Nations is past. The task before us now, if we would not 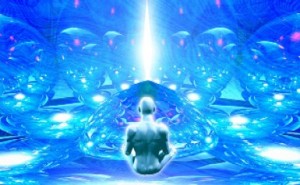 Without implying teleology (much less “intelligent design”), clearly something greater is going on in human consciousness, something that goes far beyond man-made meanings and history. Can humankind align itself with the universe, and reverse an exponentially growing trajectory of division and fragmentation? Can the source of ecological destruction, war, gross economic disparity, and mass depression radically change? I feel the universe pressing these questions.

Philosophical insights into the cosmic contradiction of man, however accurate, cannot substitute for the arduous work of bringing about the requisite transmutation within us. That’s the responsibility of each person alone, without recourse to any authority, be it religious or scientific. That said, an adequate explanation could be helpful, at least by helping to allay the rampant misanthropy that’s currently leading many people to believe the self-fulfilling prophecy that humankind is a random and meaningless non-indigenous ant colony overrunning the Earth.

When thought is completely quiet, the brain is like a very sensitive antenna, receiving and reflecting awareness far beyond our imagining. That’s our ultimate purpose. If we don’t destroy our capacity for awareness, but develop it as much as we can in our short span on this mortal coil, we can awaken intimations at least of the cosmic mind in our own brain, and help humankind take our place in the universe.

In short, whether we stand at the end of our spiritual development, or its true beginning, is up to us. Question and find out for yourself. There are no bystanders when evolution is demanding a psychological revolution.

The problem with this interpretation is that it embraces the quite natural anthropocentrism which is the genetic and cultural legacy of our species.

Humankind is quite wrongly regarded as the pinnacle of evolutionary processes.

In fact, viewed objectively in the light of our modern understandings of nature’s workings. we find that humankind is properly viewed as simply a cog in the wheel of natural machinery.

A soon to be surpassed phase of a greater evolutionary process that can be traced at least as far back as the formation of the chemical elements in stars and supernovae. And projected through the autonomous evolution of technology in the medium of shared human imagination to the next phase of the overall life process. Currently in gestation as what we now call the Internet.

These considerations are expanded upon, very informally, in “The Goldilocks Effect: What Has Serendipity Ever Done For Us?” , a free download in e-book formats from the “Unusual Perspectives” website

This is a misreading of what I’m saying, and a denial of humankind’s spiritual potential. A misreading because the reader projects the old “man is the pinnacle of creation” idea onto my piece, when I explicitly said that was the pitfall de Chardin fell into. The idea that “humankind is simply a cog in the wheel of natural machinery” is actually anthropocentric, since it conflates man’s machines with the workings of the universe. The cosmos is not a machine. The human brain, as an expression of terrestrial an cosmic evolution, is undeniably the most complex brain on this planet. But at present we are using it to destroy the earth and the virtually untapped spiritual potential the brain confers.

” There are no bystanders when evolution is demanding a psychological revolution”