The Case for Not Voting in the Presidential Election

The time for publicly shaming nonvoters is upon us. Tom Hanks wants to spank them. “If you don’t vote,” says Alicia Keys, “the whole world could just burn.” Katy Perry has ensconced herself in a ballot. Lena Dunham is comparing voting to sex. In the midst of this, my former colleague Katherine Mangu-Ward tempts some hate-mail by making the case for staying home. 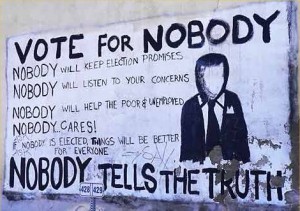 The presidential election will, as we know, be decided by a fraction of people in a fraction of states. If you live in California or Connecticut, you require a justification for voting other that that of efficacy, and though I hear much about “sending a message,” the idea that a single vote sends any kind of message at all would seem to suggest a certain level of innumeracy. There are better arguments. There is, for example, the claim that voting is a “civic sacrament” in which we are obligated to participate in order to affirm the legitimacy of democratic institutions. There is the idea that we owe it to the suffragettes and the Selma-to-Montgomery marchers.

I do wonder what, precisely, we owe to the suffragettes. Do we owe it to them to vote, or to be informed voters? Should we have perused Mitt Romney’s curious tax plan? Read up on Obama’s newly branded disposition matrix? Checked to see whether, as Obama implies, only “gangbangers” get deported? It is considered universally acceptable to demand that our neighbors “get informed.” Oddly less acceptable is the promotion of the idea that people who are not informed—people, who, for example, do not know that Joe Biden is the vice president—ought not to vote. I would be open to the argument that people for whom the words “Joe Biden” are totally unfamiliar make sound decisions, but it appears that they are more likely to make sexist, racist, and otherwise unfortunate judgments.

abstain.” There is a moral obligation to vote “on the basis of sound evidence for what is likely to promote the common good.” Perhaps you’re uncomfortable, for reasons having to do with privilege and class, arguing that people have an obligation to be informed before they vote. Perhaps you merely hold yourself to this standard. But there is the question of opportunity cost. It takes time to adjudicate the evidence, to determine which is sound. It is hard to keep up. As Glenn Greenwald notes, even Debbie Wasserman Schultz cannot keep sufficient pace; the existence of the kill list/disposition matrix was apparently news to her.

There are limited hours in the day, and for many of us, very limited hours not claimed by work and familial obligation. What portion of these hours should be devoted to CNN? Even if you feel subject to the sentimentality of civic romance, there are competing sentimentalities that seem as compelling. Maybe you feel your community less to be your living neighbors and more to be the dead writers you encounter in books, your extended family back home in Burma, or the international crowd with whom you bond over some esoteric subject online. Maybe you’d rather spend your time connecting with them, or connecting with the natural world, or connecting with them in the natural world. Maybe you’d rather spend your time in monastic silence, away from people altogether, because this is the only way that your thoughts feel truly your own. Maybe you think all the banal political chatter degrades your capacity for creativity.

Maybe you’d rather be rereading Moby Dick than reading a David Brooks column. People will want to say that these are false choices—that you can do all of these things and also vote and also cure cancer and also amass a Dave-Weigel-like encyclopedic knowledge of American political factoids. But the constraints on leisure time are real. Do people, on their death beds, regret all the votes they failed to cast? I do not know.

For all the pro-vote haranguing, and the contempt shown toward those who expend their energy elsewhere, it seems worth noting that there are competing, worthy demands on our time. It’s true that the moment we turn our backs, the world, as Alicia Keys says, may burn. But among the many privileges of life in a stable democracy is the knowledge that it probably won’t.

By Kerry Howley, from www.slate.com

A President In Waiting