Health News – A Texas health care worker who cared for Liberian Ebola patient Thomas Eric Duncan at a Dallas hospital has tested positive for the virus, apparently as a result of a “breach of protocol” for treating the disease, the director of the federal Centers for Disease Control and Protection said Sunday. 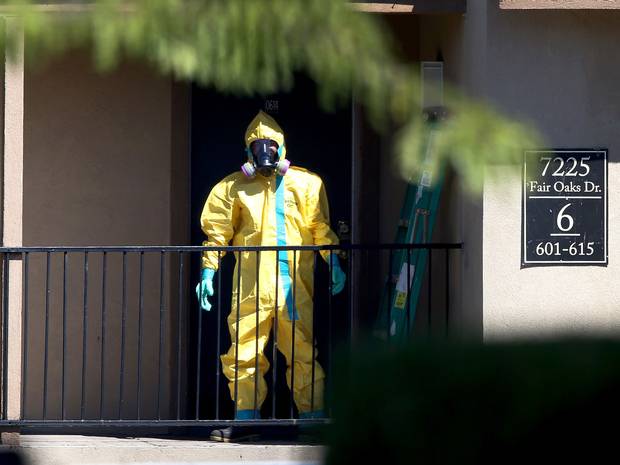 Dr. Thomas Frieden said officials at the agency are “deeply concerned” about the new Ebola case involving a female caregiver, because she was infected after Duncan was admitted to Texas Health Presbyterian Hospital on Sept 28, when all workers were taking full precautions against Ebola transmission. He said the unidentified employee had been interviewed and could not “identify the specific breach” that allowed the infection to spread, he said.

She was not among the original 48 people identified as having had contact with Duncan, all of whom are being monitored. The original contacts of Duncan have a week to go on their 21-day monitoring period and are not out of the woods yet.

Frieden, speaking at a news conference in Atlanta, said the CDC was working to identify other health care workers who also might have also come in contact with Duncan.

“If this individual was exposed … it is possible that other individual were exposed,” he said. Until the source of the caregiver’s exposure is determined, he said, the CDC is recommending that the number of health care workers who treat potential Ebola patients be kept to a minimum.

The hospital worker was assessed on Friday after developing a fever and was tested on Saturday, resulting in a preliminary positive for Ebola. CDC in Atlanta still must confirm the positive test, which would be the first known case of Ebola being transmitted in the U.S. Frieden said the results of that test were expected later Sunday.

The worker at Texas Health Presbyterian Hospital became infected despite wearing full protective gear while treating Duncan, who died on Wednesday from the disease, according to hospital officials, who spoke at an earlier news conference in Dallas.

Dr. Daniel Varga of Texas Health Resources, which owns the hospital, said that the worker wore a gown, gloves, mask and shield when providing care to Duncan. Varga did not identify the worker and said the family of the worker has “requested total privacy.”

The employee is in stable condition, according to a statement from the Texas Department of State Health Services. It said the worker had been on a self-monitoring regimen prescribed by the CDC, which required taking their temperature twice daily. After detecting an elevated temperature, the care-giver notified the hospital and was immediately admitted to the hospital in isolation, it said. The entire process took 90 minutes, it said.

Neighbors said a hazardous material truck arrived at an eight-unit apartment building on Margarita Avenue at approximately 5:30 a.m. local time and handed out informational sheets on Ebola. Other residents in the younger professional neighborhood said they wanted more information on the caregiver who had contracted Ebola.

At the Dallas news conference, officials said one person who had close contact with the health-care worker has been put into isolation and that 18 other people who had lesser degree of contact were being monitored.

The case will put more pressure on the hospital, whose staff broke CDC guidelines when they sent an already ill Duncan home the first time he came seeking care, on Sept 25.

“We knew a second case could be a reality, and we’ve been preparing for this possibility,” Lakey, the Texas Department of State Health Services commissioner said. “We are broadening our team in Dallas and working with extreme diligence to prevent further spread.”

Frieden, the CDC director, has cautioned that people might arrive in the U.S. with Ebola and that they might infect some other people. But he has said he is confident it won’t spread far and certainly not like it is spreading in West Africa, where more than 8,000 people have become infected and half of them have died.

Why a Bachelor Party in Jaco Beach, Costa Rica? (Video)