Terrifying Photo; Woman Hiding on Roof from Intruder – Then He Appears Behind Her

World News – This incredible photo shows the moment a terrified woman hid from an intruder on the roof of her home only for him to appear behind her. 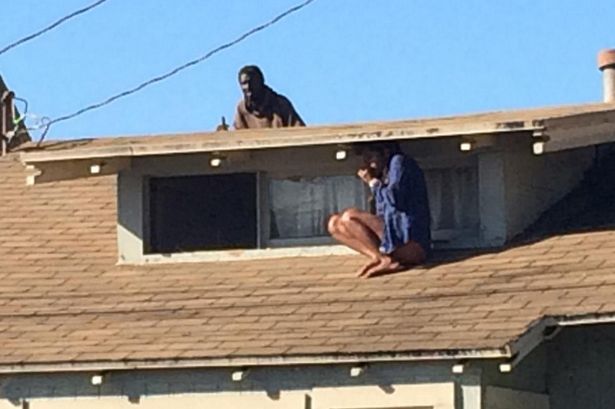 Melora Rivera climbed atop the roof of her California home and ducked under an eave after spotting vagrant Christian Hicks, 29, inside her property.

She quickly called the police but as this picture snapped by a local blogger shows, Hicks lurched onto the roof behind her, coming just feet away from finding her hiding place.

The police soon arrived at her home in Venice, Los Angles and gave her a ladder so she could quit the roof.

They later coaxed Hicks down too.

Rivera, who had a small role in the 2012 Whitney Houston film Sparkle, had been in bed when she realised there was an intruder in her home.

She told CBS LA: “He managed to break one of these panels and reach in to unlock the door.

“Once I saw him in the house, I knew that we both couldn’t be there.

“I knew that I didn’t want to have a confrontation with him of any sort, you know, not knowing what his intention was.

“It was my biggest fear was that he was going to be forced by the cops to come hide in basically the same place I was hiding.

“So there was no safely jumping off the roof or coming down from the roof at that point.”

Rivera added that the problem of homelessness in the area needs to be addressed.

She said: “I think it’s very obvious for most of us who live around here, when someone seems to be suffering from a mental illness, and to continue to let these people walk around without offering them assistance, to protect them and us.

“That, I think, is the heart of the problem.”

Hicks has been charged with burglary and his bail has been set at $50,000.