World News – This was too sweet to not republish.  A teenager has garnered national attention after stomping out a message in the snow for his mother while she underwent chemotherapy at Chicago’s Rush University Medical Center, the Chicago Tribune reported. 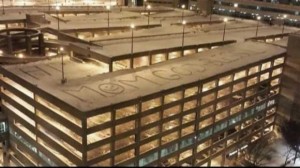 Sharon Hart, of Bolingbrook, Ill., said she was looking out the window of the hospital, where she was receiving treatment for acute myeloid leukemia, on Saturday morning when she saw a sight that made her smile. Her 14-year-old son, William, had carved a message on the top deck of the hospital’s parking lot reading: HI MOM – with a smiley face replacing the ‘O’.

“I wanted to send her the message because I thought it would brighten her spirits and help her get through this,” William, a freshman at Bolingbrook High School, told the Tribune. “I would love for her to be happy. This has been rough. I’ve been praying a lot and trying to not think about what’s going on so I can do good in school.”

William said after leaving the message for his mother, he began to think about all the other patients in the hospital. So a few hours later, William and his father added the phrase, ‘GOD BLESS U!’ The message was large enough that it was visible from nearly the entire east side of the hospital, from the ninth floor to the roof.

Soon after, nurses, doctors and patients began posting photos of the message on social media – and William’s act of kindness started to go viral.

“My son has never done anything like this before,” Hart, 48, told the Tribune. “He is a very caring child and very loving. … He acted on instinct and from what was in his heart. I’m glad so many people got to see the message and that it touched so many. It shows how big God is.