Costa Rica News – Due to the attractiveness and triumph of its Costa Rica program, Sunwing Airlines has just announced the launch of new flights to San Jose (SJO), in addition to its current flights to Liberia (LIR). Flights from Toronto will depart weekly on Fridays from December 21, 2012 to April 12, 2013. 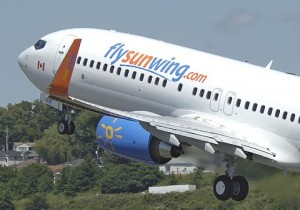 Sunwing will also be offering holiday packages, which include an admirable selection of hotels in some of Costa Rica’s most prevalent Central Pacific destinations. Located only 50 km from San Jose on the attractive Gulf of Nicoya, Sunwing offers the DoubleTree by Hilton Puntarenas Hotel. Hotels in the Jaco area, which is popular for surfing, include the Best Western Jaco Beach Resort, the Punta Leona Hotel, and the Terraza del Pacifico. Also offered will be the Barcelo Tambor Beach hotel, situated in Bahia Ballena and resting on the volcanic sands of Tambor Beach. For those interested in exploring the sights and sounds of cosmopolitan San Jose, guests can stay at the Barcelo San Jose Palacio, the Barcelo Palma Real, and the Best Western Irazu Hotel and Casino.

“We are delighted to add flights to San Jose, Costa Rica,” commented Andrew Dawson, President of Tour Operations. “Not only will travellers be able to enjoy vacation packages to beach resorts in the Central Pacific region, they will also be able to take advantage of affordable flights into San Jose to join independent tours beginning and ending in the city, as well as connect with flights to other Central American destinations.”

San Jose vacation packages at the DoubleTree by Hilton Puntarenas Hotel are priced at $955 per person (based on double occupancy), plus taxes of $320 for departures on January 11th, 18th and 25th, 2013.

All Sunwing vacation packages to San Jose, Costa Rica include flights aboard the “high frills” Sunwing Airlines, where passengers are treated to the award winning Champagne Service, which includes a bon-voyage glass of champagne, hot towel service, a choice of hot meals at lunch and dinner served with choice of wine, and complimentary in-flight entertainment, including first run movies. For just $40 more per flight segment, travellers can upgrade to Sunwing’s Elite Plus service, which features extra leg room seats, advance seat selection, separate check-in at a majority of airports, advance boarding, and 30 kg baggage allowance.

Man Accused of Having Sex with Horse For a Second Time!

Drinking too much coffee can MAKE YOU BLIND