Costa Rica News – Well the Costa Rica Government really knows how to shoot itself in the foot and if their goal is to kill tourism in Costa Rica they are on the right path.  First they make it so you cannot smoke in the bars and restaurants, and now this. Each an everyday in the land of “Pura Vida” if you are walking down the beach, walking past a bar, or just playing in the park people are consuming alcohol.  It is a part of the culture in Costa Rica. If you are a tourist and want to enjoy a cold beer on the beach, now you have to worry about a cop writing you a $360 or more fine for just trying to relax.  Most likely the police office will just take $30 to $50 from you and take your alcohol, which is still a pain in the ass. 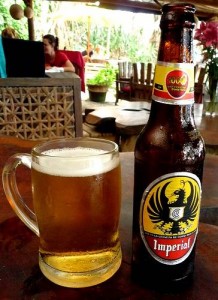 With the passing of this rule is prohibited to drinking in public and is punishable by a fine of half of the monthly salary of who does it (the average base salary today is equivalent to ¢ 360,000).  This to me is absolutely hilarious.  so who do you think this is going to effect the most.  That’s right tourists and gringos living in Costa Rica.  It is just trying to extort more money from these people by fines and police bribes. So those bums that smell like they have slept in a pile of baby poop for a few weeks that are wasted and asking you for money will receive a fine of $0 and a tourist sitting on the beach or retiree enjoying a beverage outside has the possibility of a huge fine.

Lets talk about the consequences and implementation of this law.

1. Tourists will not know about this law and will be taken advantage of when they go outside the bar or are drinking on the beach.  This will reduce tourism by bad press even more.

2. The fine on this is 1/2 of one month’s salary.  This is huge fine. For someone making the average salary in Costa Rica of $720 then it is $360. But what if you are a a gringo making $2000 a month here or a retiree living off a $3000 a month pension? That fine skyrockets into amounts over $1000. What are they going to do ask for employment records of tourists from the USA?

All of these things are going to reduce tourism even more. If I had the choice between going to Jamaica or Cancun or Nicaragua and could enjoy my vacation by drinking where I want and smoking where I want or come to Costa Rica and risking being fined or having problems, I not choosing Costa Rica.

The approved legislation is for establishing a new legal framework that regulates the licensing for the sale of liquor and pus in place bans and sanctions and those who engage in that activity.

Article 9. ° prohibits the consumption of alcoholic beverages on the way and public places, except for civic festivals, popular events, employers or fairs.

Complemented by Article 20. °, which provides the aforementioned fine as punishment.

This is just one of the new sanctions and regulations including the Law # 9047, Regulation and Marketing of alcoholic beverages.

The law also imposes other penalties. Highest paying punishable by up to ¢ 5.4 million ($10,800)  to those who sell liquor to minors and prohibits transfer to others t0 give permission to sell liquor.

The new legislation was passed on the 7th of June in Congress with the vote of a majority of the deputies, and signed the president, Laura Chinchilla, on the 25th of June.

Michael Phelps to Go From Swimming to Reality TV Show

Only in Costa Rica for Week of Aug 13th