World News – After two scrubbed launch attempts, SpaceX’s Falcon 9 rocket finally blasted off on Tuesday to send a commercial satellite where no SpaceX payload has gone before: 22,000 miles up, into geostationary orbit.An orbit that high allows a satellite to be “parked” over a stable point on Earth’s surface — which is why it’s favored for the kinds of military and telecom satellites that provide the richest market for commercial launch providers. 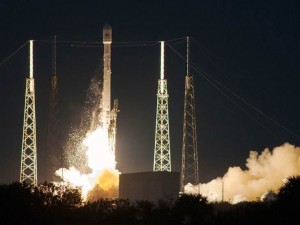 The launch could be a “game changer” for the satellite industry, according to Martin Halliwell, chief technology officer for Luxembourg-based SES. “It’s going to really shake the industry to its roots,” he told reporters last month.

SES reportedly paid less than $60 million for the launch, which is tens of millions of dollars less than the going rate for satellite launches heading for geostationary orbit.

California-based SpaceX and its two-stage Falcon 9 rocket have already made their mark with a series of successful NASA-funded missions to resupply the International Space Station, which flies at an altitude of about 250 miles (400 kilometers). But early versions of the Falcon 9 weren’t powerful enough to put large payloads into geostationary transfer orbit, or GTO. Over the past year, the rocket has been upgraded with Merlin 1D engines and other enhancements, with the aim of widening the market for Falcon launches.

The Falcon 9 v1.1 rocket had its first tryout in September, with the launch of the Canadian Space Agency’s Cassiope research satellite. That satellite was deployed successfully, but afterward, the Falcon’s second-stage engine failed to reignite in a test to reach higher orbit. Relighting the second stage is essential for the success of geostationary satellite launches.

The problem was traced to a frozen igniter fluid line — an issue that didn’t turn up during ground testing under warmer conditions. To fix the problem, the company added insulation to the line.

Minutes later, SpaceX announced that the satellite separated from the second stage and was in its proper geostationary transfer orbit, varying in altitude from 183 miles (295 kilometers) to 49,700 miles (80,000 kilometers). That took care of SpaceX’s launch responsibility.

Over the next couple of weeks, the satellite’s thrusters are expected to stabilize the orbit at a steady altitude of 22,000 miles (36,000 kilometers).

The satellite was built for SES by Virginia-based Orbital Sciences Corp. It will broadcast in the Ku-band for South Asia and Indochina, and in the Ka band for the Asia-Pacific region.

SpaceX has a dozen Falcon 9 launches on its manifest for next year, including more geostationary satellites.