Travel News – No one can yet say when space tourists will ride a rocket ship from New Mexico’s Spaceport America into the blue, but earthbound tourists can now get a taste of the space experience at the $219 million facility without leaving the ground. 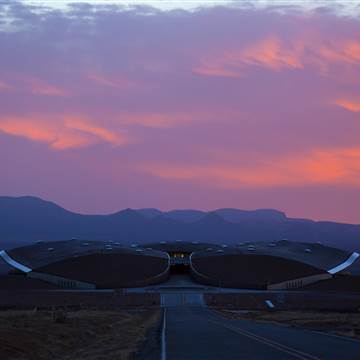 The Spaceport America Experience tour made its official debut on Wednesday, kicking off with a ribbon-cutting ceremony at a spiffed-up visitor center in Truth or Consequences. The experience continued with an hourlong bus trip from the Old West town (known as “T or C”) to the state’s gateway to the final frontier, 28 miles away.

Among the tourists were city officials, business and community leaders and journalists, as well as students and teachers from nearby schools. The kids got a kick out of a “G-Shock” simulator that looked a lot like a carnival ride — but the attraction that really wowed them was a life-size replica of Virgin Galactic’s SpaceShipTwo rocket plane, set out in the spaceport terminal building’s 45,000-square-foot hangar.

History has its dark as well as its bright moments, however: Wednesday’s kickoff came nearly eight months after the first working SpaceShipTwo broke apart during a rocket-powered test flight over California’s Mojave Desert. One of the pilots was killed. The other was seriously injured. The accident forced Virgin Galactic to put its test program on hold — and threw Spaceport America’s spaceflight schedule into limbo.

Virgin Galactic’s CEO, George T. Whitesides, acknowledged the difficulties during Wednesday’s ceremony, but he said the company was undeterred. A second SpaceShipTwo is under construction in California.

“One of the things we know as Americans is, you can’t stop when things get hard,” he said.

How Tourism Figures in the Plan

Spaceport America’s CEO, Christine Anderson, told NBC News that the spaceport is bringing in about $2.4 million in annual revenue — thanks to Virgin Galactic’s lease payments and other deals, ranging from a SpaceX lease to commercial photo shoots. But that’s not enough to get the spaceport to the break-even point. Anderson said the state provides more than $460,000 annually to fill the gap.

To reduce the need for state subsidies, the New Mexico Spaceport Authority revised its business plan with an aim toward diversifying its revenue sources. Such efforts are starting to bear fruit: Last month, the spaceport struck a tentative deal with X2nSat, a satellite ground station venture.

The tour operation is another part of the business plan. A company called Follow the Sun Tours has been running “hard-hat” preview tours for years, but now the company will be guiding customers through full-fledged guided tours. Spaceport America gets a cut of the ticket price — about 15 percent, Anderson said.

The tour starts out from the visitor center, housed in a 1930s-era adobe building that has served as the town’s police station, city hall and senior recreation center over the decades. During the bus trip to Spaceport America, riders can watch videos about the region’s history.

Once their bus is waved through the gates, tourists get to walk through the dome-shaped Spaceport Operations Center and cruise down the spaceport’s 12,000-foot runway — but the piece de resistance is the “Gateway Gallery,” an exhibit hall that overlooks the facility’s cavernous hangar.

In addition to the G-Shock simulator, the Spaceport America Experience offers spacey video games, a sphere that lights up to shows satellite orbits crisscrossing a map of Earth and kid-friendly science exhibits that were designed by IDEAS, a Florida-based company founded by theme-park veterans.

The venture hasn’t been without controversy: Some critics took aim at the spaceport’s $9 million contract with IDEAS. Others were upset to see Truth or Consequences’ senior recreation center converted into the tour operation’s visitor center.

In advance of Wednesday’s ribbon-cutting ceremony, a few town residents carried protest signs on one side of the street. But on the other side of the street, just as many others held up signs welcoming the new visitor center.

Truth or Consequences’ mayor, Sandra Whitehead, said it’s been a challenge to balance the town’s old heritage with its new aspirations — but she added that “we can do it, if it’s done right.”

“What we’ve done today will be a big boost for our economy and our community,” she told NBC News.

Anderson also talked up the economic benefits — and said the tourism angle will provide a bonus that’s hard to put a price tag on. “When I go to Spaceport America, I expect to have fun,” she said. “I want people to have fun. I don’t know the last time I went to an airport to have fun.”

Tours leave from the visitor center at 301 S. Foch St. in Truth or Consequences, N.M., several days a week at 9 a.m. and 1 p.m. General admission is $44.99 for adults who book online in advance, and $29.99 for ages 18 and under. The cost is $24.99 for residents of Doña Ana County and Sierra County, which help fund the spaceport with tax revenues. Check the Spaceport America website to learn more about the tour or book a reservation.

By by ALAN BOYLE, NBCNews.com