World News – Let’s hope for a sunny days on this trip. 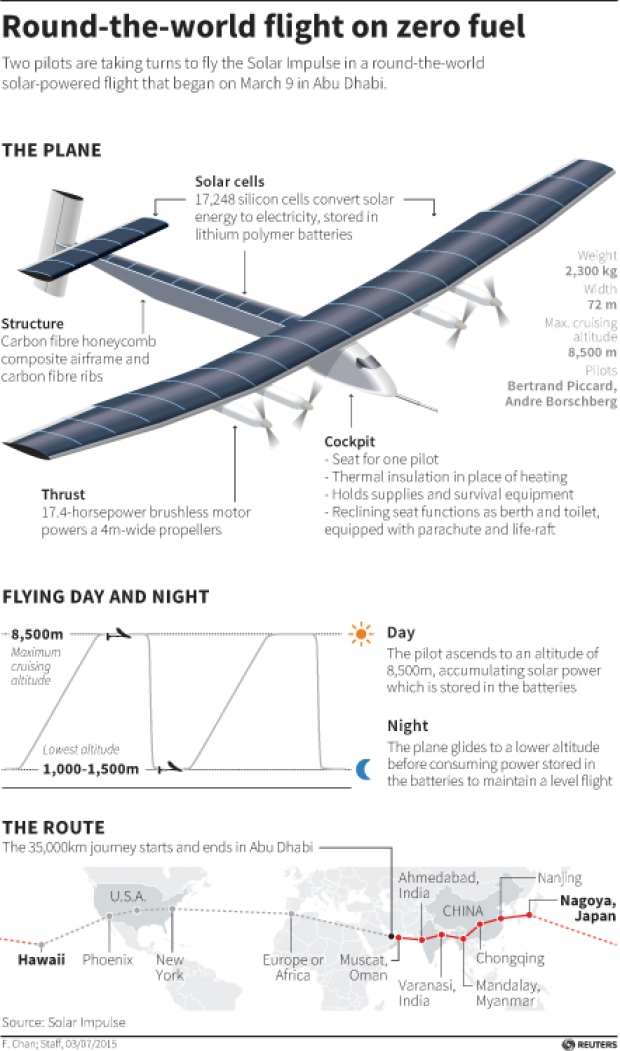 The solar-powered plane on a record-setting around-the-world journey was about a third of the way along a treacherous flight from Hawaii to California early Friday, according to the project’s mission control.

Bertrand Piccard, piloting the Solar Impulse 2 aircraft, watched the sun rise over the north Pacific after taking off on battery power during darkness, according to a livestream from a website documenting the journey.

“Absolutely fantastic moment…. That’s a sunrise I will remember all my life,” he said.

The trans-Pacific leg is the riskiest part of the plane’s global travels due to the lack of emergency landing sites.

After some uncertainty about winds, the plane took off from Kalaeloa Airport in Hawaii on Thursday morning and was on course to land in Mountain View, Calif., over the weekend. The crew that helped it take off was clearing out of its Hawaiian hangar and headed for the mainland for the weekend arrival.

At one point passengers on a Hawaiian Air jet caught a glimpse of the Solar Impulse 2 before the airliner sped past the slow-moving sun-powered aircraft.

The Solar Impulse 2 landed in Hawaii in July and was forced to stay in the islands after the plane’s battery system sustained heat damage on its trip from Japan.

The aircraft started its around-the-world journey in March 2015 from Abu Dhabi, the capital of the United Arab Emirates, and made stops in Oman, Myanmar, China and Japan. It’s on the ninth leg of its circumnavigation.

Piccard said the next destination, in the heart of Silicon Valley, is fitting, as the plane will land “in the middle of the pioneering spirit.” Various West Coast destinations had been in the running as possible stopovers, including Vancouver and Los Angeles.

The next flights are expected to take the aircraft to somewhere in the U.S. Midwest followed by JFK airport in New York, before beginning the transatlantic crossing to either Europe or North Africa.

Piccard and co-pilot Andre Borschberg take turns flying legs of the journey on the single-seat plane. Borschberg flew the stretch from Japan to Hawaii. They can take short naps while strapped in at the controls, and there is a modest toilet under the seat.

The plane’s ideal flight speed is about 45 km/h, though that can double during the day when the sun’s rays are strongest. The carbon-fibre aircraft weighs more than 2,200 kilograms, or about as much as a midsize truck.

The wings of Solar Impulse 2, which stretch wider than those of a Boeing 747, are equipped with 17,000 solar cells that power propellers and charge batteries. The plane runs on stored energy at night.

In Costa Rica Expect to Be At a Turtle’s Pace