World News – I guess sometimes God and snakes cannot save you.  I do not even know what to say in regards to this story. A Kentucky preacher famous for handling snakes during religious services, has died after being bitten by a poisonous snake at his church. 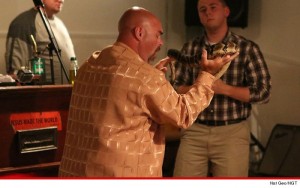 Jamie Coots was bitten at his church in Middlesboro, Ky., and died after Coots refused to go to the hospital for further treatment, according to police.

The Middlesboro Police said they believed Coots was 42 years old.

Coots was the star of National Geographic’s “Snake Salvation” reality series, which followed the 42-year-old as he worked to preserve his way of religious way of life at his church, the Full Gospel Tabernacle in Jesus Name.

Coots told ABC News during an earlier interview for “Nightline” that he and his followers believe that God calls upon them to handle venomous serpents and to drink other poisons. If bitten, Coots and his parishioners refuse medical treatment because they believe that their fate is in God’s hands.

Police said they received a call about a snakebite injury around 8:30 from Coots’ church. However, when emergency responders arrived at the scene, Coots had already driven home about one to two miles from his church.

Police and medical personal then went to his home and found that Coots had been bitten on his hand. For another 40 minutes medical personal stayed with Coots and tried to persuade him to go to the hospital for further medical attention.

Coots refused and eventually the emergency responders left. An hour after they left, another call was made from Coots’ home to say that the pastor had died. Emergency personal and the coroner was dispatched to the scene. Currently the death is being treated as a non-criminal investigation.

Both Coots’ father and grandfather handled snakes as Pentecostal preachers and Coots wanted to pass on the tradition to his son. Last year Coots showed ABC News his backyard snake shack. He had a permit that allowed him to legally keep the animals.

In 1995, one of Coots’ parishioners suffered a fatal snake bite in 1995 after she refused anti-venom.

“If someone gets bit in my church and they’re not immediate family. I will call 911 and have the paramedics come out and let them tell the paramedics they don’t want medical treatment,” Coots told ABC News during an interview for “Nightline” last year.

Coots told ABC News he had been bitten nine times and even lost his finger during a previous bite since he refused medical attention.

Only in Costa Rica for Week of February 17th