Costa Rica News – Well lets hope that the Costa Rica can clean up this mess before the tourists start flooding Costa Rica in a couple of months.  Actually, we can only hope that a sewage treatment facility is soon implemented in Costa Rica so these septic tanks overflowing can be solved as a problem. 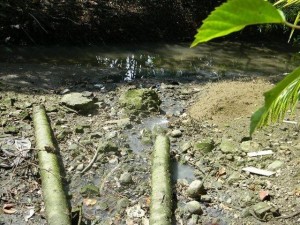 An unpleasant odor fills the center of Quepos. The pipes are green and when the tide rises at about 5 am, it drags with it a lot of trash and debris that will then go out to sea.

The fire department even had to clean the pipes with hoses, because the stench was unbearable.

Isabel Leon, Aguirre Canton mayor, explained that this situation became an emergency and the solution is urgent.

“Quepos has no sewer system. Some houses have septic tanks, but the sewage is pulled to storm water channels or streams or rivers in the community, “said the official.

In fact, complaints about smelly sewers and houses throwing sewage into rivers are recurrent in Quepos, said Horacio Backer, director of Health Aguirre. “At the institutional level, this is one of the problems that are serving,” said the expert.

According to Backer, the lack of planning and sprawl of the city is the major contributor to the health crisis in Quepos. Who would have ever thought Costa Ricans would be caught not planning for the future?

“The City has not had the vision of what to do as the city grows. We found that most homes do not have building plans and also forecasts for wastewater management, and so today we find that increased problem from this situation, “said Backer.

Arnold Gamboa, environmental manager of the Ministry of Health, said that another factor which contributes, is the fact that Quepos is below sea level. This causes septic tanks to be easily damaged.

“What happens is that the ground is very muddy and drains do not work, the groundwater is very shallow, so that waste from sewage leak into the estuaries and go into the sea,” said Gamboa.

According to the mayor, the City is working on updating a report 12 years ago on sewage treatment. But he warned that there is no information on how many houses dump their sewage, or the content of fecal coliform in the waters of the estuary.

Is the Internet Making Us Dumber?

Foreigners with Criminal Past can Circumvent Costa Rica Residency Law

Redirect tourists to the new stadium. The Green Lie must go on ! Don’t forget to offer them shark fin soup.

I think the solution is for every house to have a Septic tank that will collect the waste and drain it back to ground water and have the septic tank pumped of wet waste. that’s what we do in the uk for properties that use a septic tank.