Travel News – In-flight Wi-Fi is a godsend for fliers with important business to conduct or a cute, “can’t-wait” selfie to send. But is that modern amenity worth $1,200? 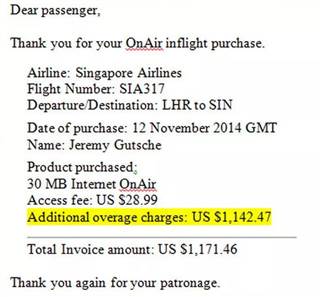 During a recent flight from London to Singapore on Singapore Airlines, Gutsche signed up for a $30 in-flight internet package. He checked his email and took a nap. Then he woke up to a Wi-Fi bill for over a thousand dollars.

“Yes, the pricing per mb was disclosed on sign-up, but I bought the $30 package, slept through most the flight, and really didn’t think I’d end up a thousand bucks past the limit,” he wrote on his website. Gutsche could not be immediately reached for comment.

Indeed, the busy trend watcher who described himself in an online profile as “easily distracted” may not have noticed if he clicked “allow me to use the internet without interruption” or “disconnect my session when I’ve reached my data allowance” at sign-in.

A Singapore Airlines spokesperson said the company “is in touch with Mr. Gutsche regarding his recent feedback.” But OnAir said Gutsche, like all customers, had plenty of opportunities to bail out.

“During the flight, a bar shows your data consumption, so at all times you can see exactly how much data you are using. And even if you have opted for pay-as-you-go, you remain in complete control: you can end the session at any time using the ‘disconnect’ button,” OnAir spokeswoman Aurelia Branchereau-Giles said via email.

Domestic airlines offering air-to-ground internet service often offer a pass for unlimited use during a flight, a day or a month. But satellite-supported internet connectivity offered by international carriers is more expensive to offer, leading airlines to offer packages of megabyte use.

“These packages are hugely unpopular with passengers, who find them extremely limiting and nothing akin to the connectivity they’re accustomed to accessing on the ground,” said Mary Kirby, editor of the Runway Girl Network. “Always read the fine print,” said Kirby, “because myriad carriers offer this sort of packaged service, and airlines will not accept a disregard of the ‘terms of service’ as an excuse for expensive overages.”

Among business travelers, Gutsche isn’t getting much compassion.

“What kind of stupid traveler pays no attention to the meter,” said Joe Brancatelli, creator of the business travel site JoeSentMe.com, “Does this guy also hop in a cab in Singapore and ask to be taken to Kuala Lumpur?” 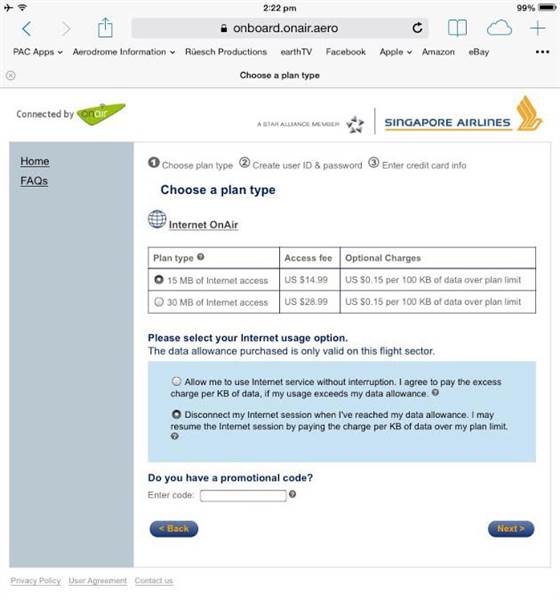