World News – Two single-engine aircraft carrying skydivers collided 12,000 feet above Superior, Wis., on Saturday evening, sending one plane plummeting to earth in flames – but all nine jumpers and both pilots survived, said one of the jumpers. 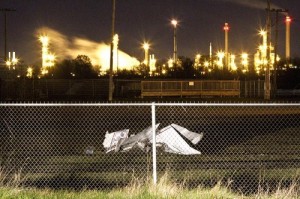 The only person injured, except for bumps and bruises, was the pilot of the plane that crashed. He used an emergency chute to escape the falling aircraft but suffered cuts, Mike Robinson, who was aboard that plane, told NBC News.

The incident occurred as a Cessna 185 was closely following a Cessna 182 for a maneuver called a tracking dive, Robinson said, in which a lead jumper is followed across the sky by the other jumpers.

Robinson, 64, of Duluth, Minn., said the weather was good – lingering clouds had dissipated. “The sun was just getting ready to set, it was our last load of the day,” he said. “It was just a perfect time to be up in the sky.”

He was one of four jumpers aboard the lead aircraft. All four were outside the door on the step ready to leap from 12,000 feet when the trailing plane collided with their aircraft – although Robinson said it is unclear just why that happened. The wings on his aircraft separated and the fuselage caught fire, and all four jumpers immediately leaped to safety.

The pilot had on an emergency parachute and was able to get out of the plummeting fuselage, although he suffered cuts to his hands and face, Robinson said. NBC station KJBR of Superior reported that he was taken by ambulance to a hospital, but Robinson said he did not seem too badly injured.

The other aircraft, a Cessna 185 with five jumpers and a pilot on board, went into a steep dive, Robinson said. Three jumpers had been on the step on the aircraft’s exterior, and two were able to jump immediately, but the third was pinned to the outside, he said. Eventually that person was able to leap, and two others inside also jumped. The pilot was able to pull out of the dive after losing several thousand feet, then landed that aircraft, although it suffered damage, Robinson said.

“The outcome for us was as good as it could be,” he said.

Braydon Kurtz of Superior told the Duluth News Tribune that he was duck hunting along the St. Louis River.

“We heard a boom and looked up and there’s a fireball and smoke,” he said. He said one plane “was circling down and one was going down straight.”

KJBR said the Federal Aviation Administration had been notified of the accident. The planes were owned by Skydive Superior.

Robinson said most of the jumpers were in their 20s and 30s, and he was the oldest member of the group.
“This was my fourth jump of the day – I have over 900 skydives,” Robinson said. “I’ll remember this one more than most.”

Only in Costa Rica for Week of November 4th