World News – What woul you be thinking as you plummeted 13,000 feet towards what should be certain death? Would you be saying a prayer or just going through your regrets? What if you lived?

A skydiver miraculously survived a 13,000 ft fall to the ground after his parachute failed during a jump in New Zealand earlier this month.

“I probably ought to be dead the speed I hit,” Liam Dunne, an experienced diver with over 4,000 jumps, told The Telegraph. 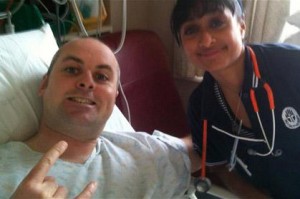 On August 17, the 35-year-old father of two exited a plane above Moteuko, New Zealand. The primary parachute opened properly at first but after Dunne went into a spin he had to cut it loose. While he was freefalling, he looked for the reserve parachute’s handle, but he found it at 748ft above the ground, which was too late.

Dunne thought he would die, but he landed in a soft wetland which cushioned the impact.

“I bounced hard and my whole left side went numb,” he said. “It felt like I had broken every bone in my body, and I couldn’t breathe. I was just sitting there dying.”

A friend landed nearby and rushed to his side.

“She looked at my leg and said ‘look, it’s still there, it’s not deformed or anything,'” said Dunne, who broke his back in the fall.

Dunne will spend the next three months in rehabilitation. According to The Telegraph, Dunne, who is originally from the UK, has lived in New Zealand since 2005, where he operates a skydiving company. His parents Jim and Lesley have traveled to New Zealand from Ireland to be by his side while he recovers.

“Chances are I am going to walk again. The fact I am alive is what I need to hold on to,” said Dunne.

Only in Costa Rica for Week of August 26th