Costa Rica News – “When the inspector came to check the freezers,” Calderon says with a chuckle, “they’d never check the engine room. So we’d hide all the fins in the engine room.”Shark finning — the notorious practice of catching a shark, cutting off its fins and throwing the rest of the body, alive, back into the water has been illegal in Costa Rica since 2005. 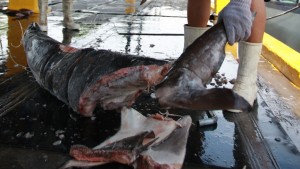 But the law didn’t stop Calderon. Once inspectors figured out his engine room dodge, he resorted to a more conventional tactic. He paid them off.

“It was easy,” Calderon laughs. “It was really easy.”

Listen to the Radio Show Here.

Calderon says he’s out of the shark-finning business now, but with a bowl of shark fin soup still fetching big money in places like Hong Kong, the incentive for others is strong.

Those others often head to the waters off Cocos, a lush island three hundred miles out in the Pacific that embodies Costa Rica’s reputation as one of world’s most environmentally-responsible countries. The rich waters around Cocos are off limits to shark fishing of any kind. But that’s done little to stop it.

At his station on Cocos, Ranger Geiner Golfin, a Fidel Castro look-alike who’s in charge of protecting the island’s waters, shows off a big hook for snaring sharks. He says it’s part of an unending haul of confiscated illicit equipment that, in just one recent month, included 200 miles of fishing line and 700 buoys.

In fact, Golfin’s team has collected so much illegal gear that they’ve built a jangly suspension bridge out of it over a stream behind the ranger station.

Golfin says all the ropes, nets, and hooks are just a small fraction of what’s out there, and that his small team is overwhelmed by the fleet of pirate boats.

But he says the biggest threat to sharks is actually Costa Rica’s top fisheries agency, known as INCOPESCA.

“We can’t do our jobs as rangers,” Golfin says. “If I go to the fisheries board and say, ‘OK, well, we need this sanction to do this or this’, they say ‘Oh no, don’t do that. You’ll get my boats in trouble.’”

Golfin isn’t the only one frustrated by the fisheries agency. So is Costa Rica’s vice minister of Waters and Oceans, Jose Lino Chaves Lopez.

It is Chaves’s job to help protect the marine environment, but he says it’s difficult because the fisheries agency doesn’t share information. And they don’t have to, since the independent agency doesn’t answer to anyone.

Chaves says there’s a conflict of interest in the agency, since most of its board comes from the fishing industry. Others are more pointed in their criticism. They say Costa Rica’s top fisheries cop often seems to protect the criminals.

Among the critics is conservationist Randall Arauz, who helped push for the anti-finning law.

The law says sharks must come into port whole, with fins attached to their bodies, so fishermen can’t just cram their boats full of fins.

Arauz says INCOPESCA seemed to be looking for ways around the mandate.

“INCOPESCA says, ‘Oh wait a minute,’” Arauz claims, “’according to the dictionary, attached means you can take it off and put it together again.’” 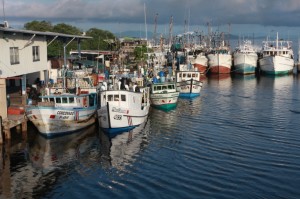 So he says agency inspectors looked the other way when what Arauz calls “Frankenstein” sharks poured into port, with lots of fins sewn onto just a few bodies.

“We took this to the Costa Rica state attorney,” Arauz says, “and the state attorney right away said, ‘No, fins attached means naturally attached.’”

So Arauz says boats then started landing with fins attached to only the spines. He says having INCOPESCA oversee fishing is like “Dracula taking care of the blood bank.”

Board member Mauricio Gonzalez acknowledges that there’s room for improvement, but he waves off the concerns of activists like Randall Arauz.

“They thrive on foreign money,” Gonzales says. “The more problems they find — the more they make up! — the more money they get.”

Critics claim Gonzalez himself was once implicated in illegal shark fishing near Cocos, a charge that he denies.

Oceans Minister Jose Chaves says the government is trying to tighten the screws on finning, but he admits changes are slow to come.

That’s clear in Puntarenas, where Captain Calderon used to smuggle his illicit catch. On a recent day, a tuna boat offloaded about a dozen frozen sharks. Workers tossed the big fish onto the dock and hacked off their icy fins, while inspector David Casillo checked to make sure the fins arrived naturally attached.

He also boarded the boat to make sure there was nothing left in its cargo holds. It all took less than five minutes.

What about the engine room, where Captain Calderon used to stash his smuggled fins?

“The engine room?” Casillo asks. “No, we never go in there.”

Report and Pictures by Reporter Shannon Service of pri.org