World News – Sitting beside a former congressman from Kansas struggling with Alzheimer’s, Seth Rogen opened up today before a Senate committee in Washington about his family’s own personal battles with the disease. 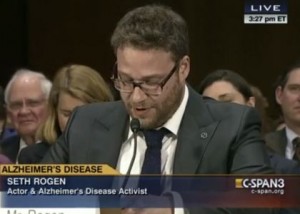 Rogen, 31, began dating his now-wife Lauren Miller nine years ago when he met her parents for the first time.

He said after meeting the family, Miller admitted something was wrong with her mother Adele. Not long after that, her mother was diagnosed with Alzheimer’s while only in her mid-50’s.

The “Knocked Up” star, now an Alzheimer’s Association celebrity Champion, said it came as little surprise since both of Adele’s parents had the disease as well.

He said at the time, he was in the dark about the disease, thinking “it was something only really, really old people got” and involved “forgetting your keys and mismatched shoes.”

“After forgetting who she and her loved one were,” Rogen told the panel about his mother-in-law’s struggles. “She forgot how to speak, feed herself, dress herself, all by age of 60.”

Rogen said this opened his eyes to what families go through when someone they love has the disease.

“I came here today for few reasons,” he testified. “One, I’m a huge ‘House of Cards’ fan. … Two, people need more help. I’ve personally witnessed the massive amount of financial strain this disease causes. … Three, to show people they are not alone, so few people share their personal stories.”

Rogen explained that in a span of 35 years, 16 million Americans will have Alzheimer’s — a disease that experts explained is the most costly disease in America, topping $200 billion for those who need care, according to the Alzheimer’s Association.

Rogen admitted the disease forced him to act. Along with his wife, they created “Hilarity for Charity,” where they have began to inform teens about Alzheimer’s.

He hopes this education campaign will change the stigma associated with the debilitating disease.

“Americans whisper the words Alzehimer’s,” he told lawmakers. “It’s needs to be yelled and screamed.”