Costa Rica Travel News – When travelling to Costa Rica animals can be seen in the wild around almost each and every turn in the road.  However, the more tourists in the area the more likely these animals will not be exhibiting their natural fight or flight behavior. 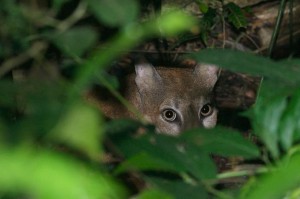 Costa Rica is an easy bet for some great wildlife sightings, especially if you are traveling from North or South America. According to Virtual Tourist members there are 2 places in Costa Rica that are ranked as the best places to experience wildlife in its truest form; The Osa Peninsula & Tortuguero National Park. Both of these locations have not been as developed as other parts of Costa Rica and the wildlife and its surroundings have been left mostly untouched.

The Osa Peninsula, located on the Pacific side of the country, is one of the few places to spot the Scarlet Macaw in the wild. The forest canopies of Corcovado National Park supposedly have the largest concentration of macaws in Central America so visitors should keep a look out for these majestic birds.

Bordering the Caribbean Sea, Tortuguero National Park is located near Costa Rica’s northeast border with Nicaragua. Tourists have described exploring the canals into the park by boat, from which they were able to spot toucans, monkeys, sloths and other animals. Another recommendation is to take a guided walking tour at night.

Tortuguero NP is also a sanctuary for nesting sea turtles. Although the green turtle is the primary focus, hawksbill and leatherback turtles are also tagged and counted by the conservation corporation. The green turtle nesting season occurs from July through October with tours occurring late at night to see turtles lay eggs. Since the beach is closely monitored during this season, you must have a guide and sign up early if you’ll be visiting during this time.