Costa Rica News – In the warm, humid air of the rain forest, with the voices of katydids in the trees outside, the darkened room burst into applause. As the credits rolled on the first screenings of their films, a roomful of tired students discovered the joy of reaching an audience with a captivating story. But these weren’t film students… in fact, they could hardly have been farther from film school. They were graduate students in biology, who had never imagined that film production might be part of their professional training. 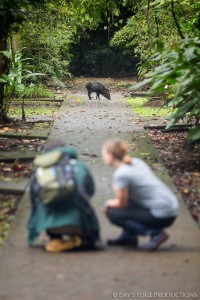 Since 1964, the Organization for Tropical Studies (OTS) has led an immersive graduate field course in Costa Rica. Students from the U.S. and around the world compete to be selected for the course. Then, over a period of 1-2 months, the course travels throughout the small Central American nation and the students conduct original research projects in half a dozen different ecosystems along the way.

Stephen Hubbell, a distinguished ecologist at UCLA, took the course in its infancy – before OTS was even officially chartered. “It was really a transformative experience for all of the students,” Hubbell remembers. “They fell in love with natural history and ecology and just couldn’t get enough of it.”

Many of the world’s foremost biologists and ecologists are alumni of OTS field courses. Peter Narins, an expert in frog communication at UCLA, calls his cohorts from the 1973 course “A virtual ‘Who’s Who’ in ecology today.”

The OTS Tropical Biology course has stuck to the same fundamentals for 50 years: 1) lots of time in the field (“the field” is what biologists call any place where research is done outside of a lab), and 2) a series of short, intense, student-designed research projects in different ecosystems – a kind of hands-on crash course in scientific inquiry.

But in the last 50 years, the reality of being a scientist has changed. The academic job market has become ruthlessly competitive, so only a small percentage of science students who earn PhDs will become professors. At the same time. while science has become increasingly important in our daily lives, scientists have developed an image problem – surveys consistently show that most Americans don’t know a scientist, don’t understand what scientists do, and often don’t trust the scientific process.

So in 2014, for the first time in 50 years, the OTS Tropical Biology course began to train science students in communication. Jane Zelikova, the co-coordinator for the 2014 course, explains: “These days, it’s not enough to publish papers and get grants to get a faculty position. I think scientists can still make a huge difference outside of academia. It is critical for scientists to reach out and share their scientific vision and passion with the rest of the world. That’s why I wanted to include a science communication component in the course.”

Visiting professor Terry McGlynn, an expert on tropical ants, points out: “Many of us scientists are also employed as educators. That shouldn’t stop at the classroom.”

During the intense month-long Winter 2014 course, the class of 18 students collaborated to maintain a daily blog and podcast. And they did something even more ambitious: they produced their first science films for the web. That’s where I came in. Course coordinators Jenny Stynoski and Jane Zelikova invited me and my colleague Nate Dappen 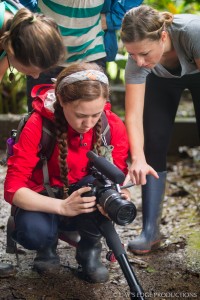 to come to La Selva Biological Station in the Caribbean lowlands. Our goal was to help the students produce their first science films.

Nate and I first met as students in the 2008 OTS Tropical Biology course. We were fresh-faced young grad students, eager to become academics after we earned our PhDs. But as time passed, Nate and I grew more aware of science’s image problem. We started a small production company in grad school and decided, after finishing our PhDs in 2012, to focus on producing science media full time.

Now, we were getting back to our roots: returning to Costa Rica where we had first met and – hopefully – inspiring a new group of young scientists to care about engaging the public with their passion for science.

If I had been a student in that classroom on the first day of our film workshop, I wouldn’t have been happy about the additional assignment I was being handed: in just three days, each group of 4-5 students had to complete not only a faculty-led research project, but also a 3-minute web film about the project.

We wasted no time. We spent one afternoon teaching the students the basics of exposure and composition. The next morning, they got their hands on SLR cameras and shot their first “scenes” around the La Selva campus. That afternoon, they used video editing software for the first time and cut their footage into a coherent 30-second scene. After this 2-day “boot camp,” we turned the students loose and hoped for the best!

Nate and I took turns visiting each group as they captured footage and sound in the field. We sat down with the “editor” of each group as he or she began to assemble their film on the computer. Film production schedules are always hectic, but this was a new level of intensity – the students had to learn a whole suite of new skills and put them into practice, all on a tight deadline. Up until the final morning, with a Student Film Festival (open to all the researchers and staff at La Selva) looming close on the horizon, we weren’t sure they were going to make it.

They made it. See for yourself! The winning video is below.

Neil Losin is a National Geographic Explorer based in Boulder, Colorado. Neil founded Day’s Edge Productions in 2010 with his colleague Nate Dappen.

All Photos are from Day’s Edge Productions

Where to Watch the 2014 Super Bowl in CR