World News – What is this world coming to? There is a serious battle going on between good and evil here in earth and everyday it looks like evil is winning this fight. 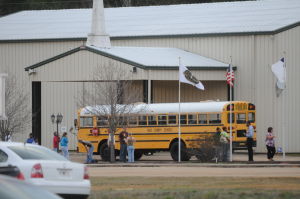 The man who is believed to be holed up in the Midland City hostage situation following a shooting on a school bus is Jimmy Lee Dykes, 65, who was scheduled to be in court Wednesday for a bench trial on a menacing charge.

James Edward Davis, Jr., who lives near Dykes on Private Road 1539, told the Dothan Eagle that Dykes pulled a gun on him and his daughter on Dec. 10 after Dykes believed Davis had driven in Dykes’ yard. Davis said he reported Dykes to the Dale County Sheriff’s Department. Dykes was arrested Dec. 22 and charged with menacing.

“It’s the craziest thing. He will be outside in his yard digging dirt at 2:30 in the morning,” Davis, Jr. told the Eagle.

The suspect, who has not been identified by law enforcement, is reported to be inside an underground bunker by his home, located near Destiny Church off U.S. 231. It is not clear whether the 6-year-old child taken from the bus after the shooting is in the bunker with him.

The FBI has been called in to assist with the case.

The incident began a little before 4 p.m. on Tuesday when the gunman got onto a school bus near Destiny Church.

Michael Creel, a neighbor of the suspected shooter, told the Eagle he went outside after his sister heard gunshots. He saw children running away from the bus and they pointed in the direction the shooter ran.

Creel said a little girl told him the shooter came onto the bus, demanded two children between the ages of 6 and 8 come with him. The bus driver refused and he shot the driver, the little girl told Creel. The shooter then took off with one of the kids.

Carol Shepard, whose daughter was on the bus at the time, said her daughter told her that a male neighbor who lives by them on Private Road 1539 got onto the school bus, shot the bus driver, and then left with a 6-year-old child.

U.S. 231, from just north of the Midland City bridge, had been closed in both directions, as a result of the shooting. Authorities have reopened the highway.

Numerous sheriff’s deputies and police officers are on the scene.

Being Organic in Costa Rica