A demolition crewfinally revealed the large sinkhole that swallowed a man from Florida in his bedroom last week after they finished knocking down the house the stood over it. 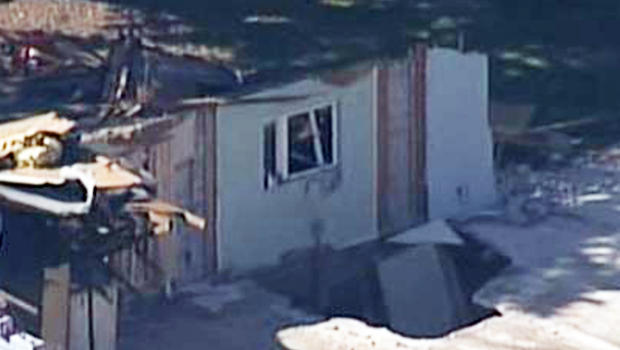 The home over the sinkhole had been as-gingerly-as-possible picked apart by a long-armed backhoe in an effort to preserve as many keepsakes as possible for the family that until last week lived in it.

Crews on Sunday razed more than half the home, managing to salvage some keepsakes for family members who lived there, and continued their work early Monday morning. It wasn’t until late Monday that the hole was revealed, reports CBS affiliate WTSP in Tampa.

A cousin of the family who lived there described watching them tear the home down as “terrifying,” reports WTSP.

“I just don’t even know what to think sometimes. All those memories, childhood, down the drain,” said Jordan Wheeler, adding that he was “heartbroken” by the situation.

Now that emergency officials and engineers can see inside the sinkhole more clearly, they could begin planning how to deal with it. They also need to decide what will happen to the two homes on either side of the affected house. Experts say the sinkhole has “compromised” those homes, but it’s unclear whether steps can be taken to save them.

Jeremy Bush, 35, tried to save his brother, Jeff, when the earth opened up and swallowed him Thursday night.

Though thousands of sinkholes erupt in Florida each year, most are small, few affect homes, and even fewer cause deaths. The sinkhole in the Tampa suburb of Seffner, however, was different.

Mark Stewart, a geologist at the University of South Florida, told CBS News correspondent Manuel Bojorquez sinkholes are rarely so catastrophic. Unfortunately, there’s no way to predict them either.

“If a cavity is large and sediments have simply, at this point in time, have clogged it, in 10 years, 100 years it could open up again,” Stewart said.

Bojorquez reports that as crews began to fill the hole with gravel, yet another sinkhold appeared a few miles away between two other homes. No one was injured there.

Crews still were working to remove enough of the home to see more clearly inside the hole and determine what steps would come after the property is razed. There has been no definitive word as to whether the hole will be filled or whether the property could be built on again. But some experts say the fact that the sinkhole claimed a life, and that his body is expected to remain below the surface make rebuilding less likely.

“It’s kind of a bad omen,” said Dave Arnold, a hydrogeologist who has surveyed sinkholes for the Southwest Florida Water 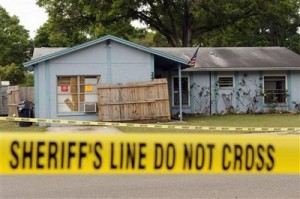 Management District. “This is an even worse omen with someone buried under there.”

Arnold and other experts expect that once the house if destroyed, crews will work to fill in the hole and the lot will likely remain empty. Depending on the circumstances, past Florida sinkholes have been handled in varied ways.

In Maitland, Fla., a sinkhole 325 feet across was discovered in the 1960s as Interstate 4 was built. The highway was diverted around the area, but in 2008 workers began a $9 million project to fill and stabilize the sinkhole in preparation for a planned expansion of the roadway. Engineers say a road can be put over it now without any problems.

In Winter Park, Fla., a sinkhole in 1981 swallowed several sports cars, parts of two businesses, the deep end of an Olympic-size swimming pool and a three-bedroom house. It stretched about 350 feet across and caused $2 million in damages. The area became a temporary tourist attraction, but most of it was ultimately deserted, filled with water and became a lake.

And in 2002, a sinkhole about 150 feet across and 60 feet deep swallowed oak trees, sidewalk and park benches near an apartment complex in western Orange County, Fla. Two buildings with more than 100 residents were evacuated, but the structures were ultimately saved. Metal sheet piling was placed around the hole to stop the soil from sliding, and it was filled.

Often, homeowners find clues to a pending problem by cracks in the foundation or a shifting floor. When that happens, and a sinkhole threat has been established, crews can pump a thick grout — a mixture of sand and cement — into the ground to fill the holes. It is a costly process, though it is typically paid by insurance companies, and can save a home from being destroyed.

“You inject the grout under pressure and attempt to fill all the cavities you can find,” said Anthony Randazzo, a former University of Florida geology professor who started the consulting firm Geohazards, which handles about 1,000 cases a year of sinkholes and other settlement issues.

Though the specifics of what will happen to the Seffner property remain unknown, Randazzo said the hole would have to be filled to keep people from falling in it and to remove a potential neighborhood eyesore.

If the family decides to try to sell the property, they would be required to notify prospective buyers of the sinkhole issue.

Currently, various county agencies are at the sinkhole site to supervise, but officials haven’t given a tally of the costs or said who is absorbing them.

For now, the focus in Seffner remains on a family mourning a loved one and trying to move on. Two large backhoes scraped and pulled at the house Monday afternoon, with one gently removing possessions including a flag, a jacket, family photographs, a bicycle and a china cabinet. The other machine loaded shattered pieces of furniture and construction material into a huge waste container.

The day’s most solemn moment came at 4 p.m., when demolition stopped and workers joined family members for a brief ceremony. The many flowers and notes that had been left in front of the house were loaded into a tractor’s bucket, which swung slowly toward the sinkhole and dropped the materials into the hole. There was applause from across the street.

Crews hoped to finish the demolition by Monday evening. On Tuesday, they planned to survey the hole to better understand its dimensions. Hillsborough County spokesman Willie Puz said workers would then “stabilize the hole,” though he remained mum on details of what precisely would be done.

“Every sinkhole is different,” he said.

Culture in Costa Rica – A History of Theater