Costa Rica News – How many stray dogs do you see roaming the streets of Costa Rica? It does not matter what town you live in in the country seeing stray animals in the park and streets of your town happens almost every day. 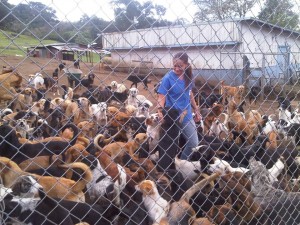 Territorio de Zaguates is a temporary home for muts that have been living on the streets, abandoned, or abused. They started a campaign to fight the stigma of muts by naming new breeds based on the lineage of the dogs they save.

They rescue and shelter the dogs, give them a new breed name, and help them find permanent homes with families that will give them the love and care they deserve. The naming of the new breeds has fought the tendency to see mutts as less valuable pets. Now they are seen as more special than pure breeds because of their uniqueness. A family can now have a dog that is like no other. Because of the large number of dogs found there, many breeds have come about on the farm that are not found in other parts.

How would you like to have a chubby tailed german dobernauzer? When Territorio de Zaguates was featured on “Buen Dia,” their facebook page blew up in minutes. This dog was the most liked on the page. Other popular ones were the Alaskan Collie and the Fluffy Terrier. The message “When you adopt a mutt, you adopt a unique breed” was on billboards and social media for a 45 day campaign. During this time the mutts obtained $457,000 of PR value, 510,484 Facebook interactions, and adoptions grew by 1,400%. In addition, 100% of the shelter’s expenses are now covered by sponsor brands.

The rescue workers will get the volunteers together and unleash the dogs. The 500 dogs are enclosed in a large gated area most of the time but twice a day they are let out to run on the many open acres of mountains, a dog paradise.

The “Wussification” Of America?