Costa Rica – After a week of traveling around Nicaragua learning about coffee growing and listening to stories of hope from those in poverty, I ended my Central American adventure with a brief sojourn in Costa Rica. 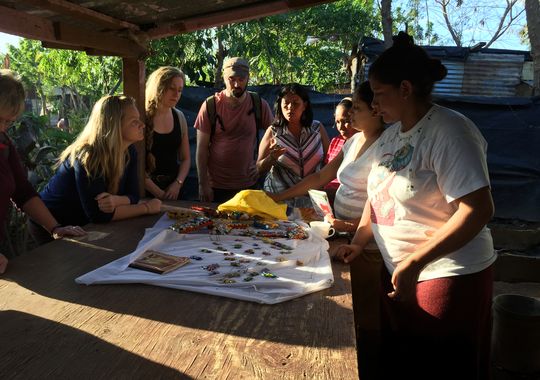 I went to Nicaragua as part of a small delegation hosted by Equal Exchange, a fair-trade coffee co-op in the U.S., and the Presbyterian Hunger Program. In Costa Rica I visited a friend from grad school who came to the country a year ago on vacation and never left.

The contrast between the two countries was immediately apparent at the border. On the Nicaraguan side, hundreds of people stood in lines in sweltering heat as vendors hocked homemade food and key chains shaped like flip-flops. On the Costa Rican side there were air conditioned buildings and cool-looking immigration officers in starched uniforms.

In Managua, the capital of Nicaragua, many buildings had fences with razor wire and bars across the windows. In Playa Grande, Costa Rica, my biggest perceived threats to my safety were crocodiles in the estuary I needed to cross to get from one town to another.

My time in Costa Rica, particularly my time running on the beach in the early morning, provided time for me to reflect on my trip to Nicaragua and its lasting impression on my soul and character.

Among my most profound experiences in Nicaragua was visiting a small group of women artisans who worked from a village of tin and plywood homes by a dump 3 kilometers long.

As we passed steaming heaps of trash, trees mired in plastic bags and gangs of vultures on the way to the village, I didn’t want to get off the bus. Of course I’m glad I did. These women were proud. They weren’t embarrassed. They were grateful for their crafts and the new trees they planted around their homes.

“We’ve overcome,” said Yamileth Perez, director of the artisan program from Esperanza en Accion, which teaches and markets crafts made by those in poverty.

Perez herself once lived in the dump. She told how she and her friends would scavenge for meat and then rub it with fruit before eating it to drown out the rancid smell.

As I watched a family of storks dive in the waters off the beach in Costa Rica and zig-zagged across the beach trying to find the best footing in my trail shoes, I tried to make sense of Perez and what I’m supposed to do next.

It will take months and years to process everything, but I’m going to start by being a smarter consumer. It’s a truism that “less is more” when it comes to material things, but we often celebrate this without consideration for the price, and sometimes paying more is worth it. I’m willing to pay a few extra dollars on coffee or clothes if I know the people that worked hard to produce those items were fairly compensated.

In meetings with labor organizers and a pants factory manager, I was pleased to learn that many sports apparel companies, like Adidas and Under Armour, pay better wages – 10% more than the minimum wage – in factories in Nicaragua.

But even this wage is barely livable, said a factory manager, only bringing people “from misery to poverty.”

I’m back now, having trading running in the sand for the snow. I’m grateful for both and for the many people I met in Nicaragua, especially Yamileth Perez.

Something she said keeps playing over and over again in my head. It’s my new meditation when I run and something I hope to personify in any shoes: