World News – There is a point where I sometimes feel really bad for far left and right wingers and their thoughts about everything.  This interview by Fox News with Reza Aslan was a complete fail by the interviewee Lauren Green. Talk about the death of being able to use your brain.

By now, you’ve no doubt watched the video and seen the headlines: On Friday, Fox News’ Lauren Green aggressively questioned religious scholar Reza Aslan over why he, a Muslim, would choose to write a book about Jesus Christ. During the length of the increasingly absurd 10-minute segment, that implied criticism quickly became direct with Green accusing the author of Zealot: The Life and Times of Jesus of Nazareth of being incapable of providing an unbiased academic account because of his faith, and even wrongly claiming that Aslan had gone to great lengths to hide the fact he is Muslim.

The Internet’s response was not kind. BuzzFeed, one of the first to spot the clip, spoke for the masses: “Is This The Most Embarrassing Interview Fox News Has Ever Done?” Andrew Kaczynski asked in a headline that needed no answer. The interview was “absolutely demented,” said New Yorker TV critic Emily Nussbaum. “This may just be the single most cringe-worthy, embarrassing interview” in Fox News history, wrote my colleague Daniel Politi. 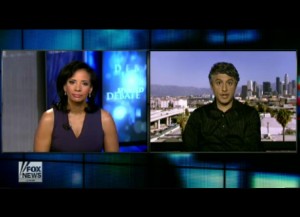 Green’s almost blindingly illogical and offensive line of questioning, though, seems to have obscured the fact that Aslan appears to have arrived ready to do battle. This wasn’t a case of an academic being blindsided by a TV anchor. If anything, it was Aslan who had the upper hand at the outset. The day before the interview, FoxNews.com had published pastor John S. Dickerson’s screed accusing the mainstream media of helping Aslan hide the fact that he is Muslim. Shortly after, a series of one-star reviews began to appear on Zealot’s Amazon page. Aslan had heard the criticism and came ready to smack it down. And—thankfully!—he did.

“Well, to be clear, I am a scholar of religions with four degrees, including one in the New Testament, and fluency in biblical Greek, who has been studying the origins of Christianity for two decades, who also just happens to be a Muslim,” the author said right off the bat, in what has to be one of the earliest appearances of an I-Have-Advanced-Degrees trump card in book-tour history. “Because it’s my job as an academic,” he said later during the segment, speaking slowly for effect. “I am a professor of religion, including the New Testament. That’s what I do for a living, actually.”

But it wasn’t just Aslan’s decision to play offense that makes the clip such a joy to watch for Fox News’ critics, who see the network as bigoted, strongly anti-academic, or both. It was also Aslan’s savvy decision to highlight the gaping hole in Green’s line of questioning.

“I think the fundamental problem here is that you’re assuming that I have some type of faith-based bias in this work that I write,” he told Green, putting the interview’s absurdity into words for anyone struggling to at home. “My job as a scholar of religions is to write about religions … and one of the religions that I’ve written about is the one that was launched by Jesus,” he continued. “I think it’s unfair to just simply assume that because of my particular faith background that there’s some type of faith agenda with this book.” By Monday afternoon, the clip had been seen more than 3.7 million times on BuzzFeed alone, and Zealot was atop both the Amazon and Barnes & Noble best-seller list. It’s safe to say that Aslan knew what he was doing—although even he couldn’t have known just how successful he’d be at doing it.

By Josh Voorhees, From slate.com