Review “After Earth”; Will Smith Hard to Watch

Costa Rica News – Costa Rica has been trying to push the video of Will Smith and his son talking about the land of “Pura Vida” while filming “After Earth”. Unfortunately, this movie seems destined to be one that Will Smith and his son might want to put behind them. While the beauty of Costa Rica might have been great for the Smiths, the reviews are coming in for the movie and they are not positive. 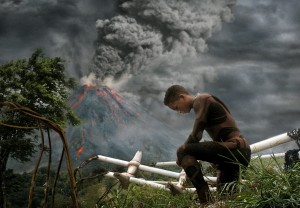 Will Smith has become the master of saving the world during summer blockbuster season and it almost seemed – almost – that the Fresh Prince could rescue helmer M. Night Shyamalan from losing even more cache.

But with “After Earth,” Smith can’t even save himself, his film, or its director.

“After Earth” is the second desolate Earth film in as many months. (There’s a few more coming, too) The Tom Cruise vehicle “Oblivion” also dealt with characters returning to the blue planet for an existential experience, and even though “Oblivion” is derivative of so many previous science fiction movies, it still feels fresh.  “After Earth” partly covers similar terrain but is just banal from the start. It’s not a good sign when the derivative movie is more imaginative.

This isn’t Shyamalan’s worst film, though it is his blandest. Even in his weaker or more contrived films, the “Sixth Sense” director usually provides something worthwhile to take away, mostly with his scene compositions or cinematography, a performance or two, or even his refreshing use of James Newton Howard’s music. But with “After Earth,” even the minutest of his signatures are missing. This is the least “M. Night Shyamalan” M. Night Shyamalan film.

“After Earth” is like a failed gift from father to son. Though Shyamalan co-wrote the script with Gary Whitta, the film was conceived by Will Smith as a vehicle for his son Jaden. What a nice present, right? Here’s a Hollywood tent-pole film. Have at it. While that’s nice for the Smiths, the overall package is severely lacking.  Jaden is not his father. He doesn’t have the experience or the talent, and unfortunately the entire film rests on his shoulders. Jaden is running from some animal for the majority of the film and proper acting isn’t much required. But it’s the moments where he needs to emote or interact with his father that are troublesome. They are rough to watch, to say the least.

But it’s not just Jaden’s performance or the mediocre story that sinks this film. The spark that has made Will Smith so popular is all but extinguished here. Smith is Cypher, a futuristic Marine that hunts an alien race that feeds on humans. To defeat these monsters which can smell fear, he must conquer that emotion. (Okay, Shyamalan hasn’t quite dropped his blaring use of metaphors) So Cypher has removed fear, as well as every other emotion, making him less alive than the walking dead. Smith then plays this with the personality of a brick. Granted, Cypher is immobile physically and emotionally for the entirety of the film, but Smith’s performance is dead on arrival.

The story is so simple it’s frivolous. Estranged father and son crash land on Earth, which has become a quarantined zone after an ecological disaster hundreds or thousands of years earlier. Without the interference of humans, the ecosystem has evolved. Animals are bigger and meaner (there are flying snakes) and the jungle freezes at night. Injured and immobile, Cypher sends his defiant, but fallible son Kitai on a quest from their wreckage to some other point in the dangerous jungle to retrieve a homing beacon.  Determined to prove himself to dad and conquer his own fear, Kitai runs from point A to point B to save their hides, all the while chased by beasties, including one of those alien monsters from their home planet.  It’s an hour and forty minute chase movie that is stuck running in place.

The special effects are adequate but are noticeably fake compared to other effects-driven films out now like “Star Trek,” “Iron Man” or even the beautiful “Oblivion.”

The film tries to tackle, on the most superficial level, the rites of passage but with such a bland story and weak performances, the underlying meaning in the film only leads to indifference. Just as the Smiths are marooned awaiting rescue from this “After Earth,” so too will the audience.

Only in Costa Rica for Week of June 3rd