Entertainment News – We like a huge meaty burrito as much as the next guy, but a new eating challenge issued by a Brooklyn taqueria just seems excessive … at least until you hear what they’re offering as a prize. 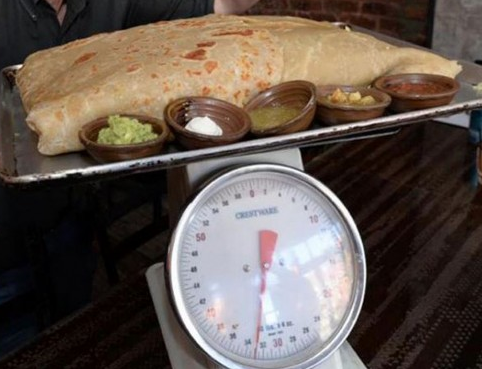 If a patron at Don Chingon can somehow manage to finish a gut-busting 30-pound burrito called the Gran Chingon — which translates roughly as “huge badass” — he or she will earn themselves a 10 percent stake in the restaurant itself.

“If you are going to eat a massive amount of food in a single sitting, you deserve real compensation,” remarked owner Victor Robey in an interview with the New York Daily News.

Robey isn’t exaggerating when he says “massive amount of food,” either. The Gran Chingon, created by chef German Villatoro, contains four kinds of meat (chicken, steak, carnitas and chorizo) as well as rice, beans, cheese and salsa. In addition, competitors will need to gulp down a ghost pepper margarita sometime during the hour-long time limit set for the challenge, which officially begins on October 19.

According to the rest of the contest’s rules, entrants will be disqualified for using the restroom or vomiting at any time during their attempt. And if they somehow manage to finish a buritto and win 1/10th of the restaurant, ownership is said to be non-transferrable upon death.

For patrons who would rather not eat a burrito that weighs slightly less than a fully-grown two-year-old, it should be noted that Don Chingon offers a wide array of realistically portioned Mexican dishes, as well as margaritas that won’t burn holes through your stomach lining.

Sharks Have Received Their Death Sentence from Costa Rica

Relocation to Costa Rica; Choosing Between Shipping Your Things or Buying in Costa Rica?