Reincarnation is a fact but not the truth, I once heard a religious teacher say. The point is to incarnate, not reincarnate. Then what the hell is hell? 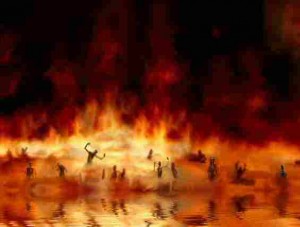 Since there’s so much of it going around in recent years, let’s begin with hell. It’s a fascinating subject–until lately that is, when evil has become so boringly predictable. But evil has always been the most interesting thing in life, and the most banal thing in death.

In a universe permeated with intelligence and compassion, hell, as a place of punishment, does not exist. Even so, it is still a cosmos of cause and effect, so what we do or don’t do in life has consequences, in life and after death.

Then what is hell? Is hell a kind of holding pen, where people who didn’t care, and didn’t care that they didn’t care (knowing that it was so), wait until the fate of humankind is decided? Do remorselessly wicked people go to the end of a line that does not move until sufficient compassion awakens in human consciousness to release them? I feel so.

As to the existence of hell, a scene in a western classic starring Paul Newman, “Hombre,” may be illustrative. Our anti-hero/hero is boxed in a cabin with a few other people by a bunch of really bad men, from a stagecoach robbery gone badly. The robbers hold the wife of a sleazeball Indian agent hostage, and have chained her to post in the desert, to increase the cabin fever and induce Hombre and the others to turn over the money.

John Russell, Newman’s white, Apache-raised character, waits with a demeanor of world-weary indifference as the woman slowly dies of thirst. Goaded into taking action by an unattached woman of some years and wisdom, he replies to her rejoinder that she doesn’t want anything from him by saying, “You want a lot more than that from me lady.”

Meanwhile, the truly indifferent husband and another man are looking down at the dying woman with hands bound and a rope tied around her neck. “Where is God?” says the onlooker man. “There is no God,” replies the onlooker husband.

“And no hell either?” replies the man. “Oh, there’s a hell alright,” says the husband, as he walks away. Indeed.

See the movie if you haven’t to see how it turns out. But don’t be a spectator with regard to the human prospect anymore. We all have our crosses to bear, and have to shoulder them without complaint, as did another, much greater man.

In short, hell is not a place of punishment, but a place beyond the reach of insight, or, in Christian terms, grace. 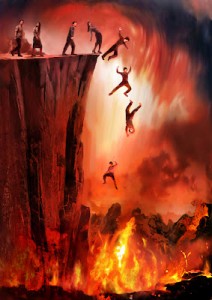 In other words, hell is not made of fire, but of ice; it is a dimension from which one cannot reincarnate, a domain of no more chances.

‘You’re saying there’s an afterlife!’ the skeptical reader may reply. No, I’m saying that what we call spirit, like matter, is inseparable from energy. One of the first laws of physics is that information is never lost. So the essence of a person either recycles, to learn or relearn—that is, reincarnates. Or, much more rarely with illumined human beings, incarnates. Hence the saying: Don’t reincarnate, incarnate!

I think that is what’s meant by ‘reincarnation is a fact, but not the truth’—that we return to get it right if we haven’t gotten it too wrong, and that we don’t return but rather incarnate if we’ve deeply learned and left the human gerbil wheel.

If and when humanity awakens, can the frozen souls of even the most evil people return and begin to learn from where they left off? Perhaps. And if humankind doesn’t make the turn, and is lost (a potentially intelligent species become extinct at its own hands), then the question of the souls in hell is moot.

So are there three possibilities: reincarnation, incarnation, or hell? Pretty funny. Who said God doesn’t have a sense of humor?

It does appear to be crunch time for humankind however, so it’s crunch time for every person on the planet. If you think you’re removed from the crisis of consciousness, then you’re contributing to its endarkenment. No one is exempt.

New Agers employ a clever trick at this point. They take the idea, ‘all I can do is be responsible for me and work on me,’ and extend it in an imaginary way to include all of humanity.

It’s a cunning way of avoiding being disturbed by what is happening to humanity in macrocosm. Thus the concern by many with self-transformation in dead western civilization often becomes a movement of self-absorption.

Indeed, if one truly practices dying every day, what is death when it comes for you? Perhaps then there is no death.

A Costa Rican Night of the Living Crabs

What Makes a Beer Refreshing?