Recope: Refinery will Produce more Revenue than Required by China

The Recope refinery  in Moin, subject to modernize and increase its processing capacity, yielding higher returns than those required by China.  The project is estimated to produce 19.2% ROI, ie, three points higher than required by the Chinese for their investments (16%) and what was initially estimated. 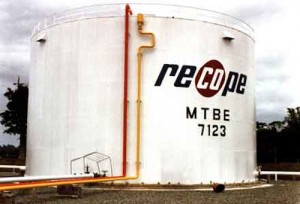 This assertion comes from Recope, and is based on a report by the Australian consultant Worley Parsons , hired to analyze the feasibility studies on investment.

The firm suggested changes to the process units and increase refining capacity from 60,000 to 65,000 barrels a day.

With these changes the project would overcome the weaknesses in the tight profit margins and product quality.

However, improvements involving an increase the amount of the  investment from $ 1,288 million to $ 1,391 million.

Regarding costs, the Costa Rican Oil Refinery (Recope) will increase from $ 127 million to $ 133 million for improvements at the old plant.

Recope ‘s investment partnership is with China state oil company, CNPC, and is focused on modernizing the old Moin refinery and increase processing capacity to meet all daily domestic demand.

Today the plant has capacity to refine 18,000 barrels a day.

To carry out the construction of a new plant for refining oil Recope and CNPC formed a company called Soresco.

Worley Parson was hired for a third opinion on the feasibility of the joint project with state oil Recope China.

The Australian-American company is in charge also of the basic engineering of the project.

A first report on the technical and financial feasibility of the initiative made by the Chinese firm Huanqiu Contracting & Engeneering Corp. (HQCEC) guaranteed a return of 16%.

However, a second analysis by U.S. consultancy Honeywell cast doubt on the adjusted profitability and product quality.

For example, questioned the difficulty in order to reduce the amount of sulfur in diesel to 15 parts per million, the country’s goal. Today is 50 ppm of sulfur.

In gasolines were detected in terms of octane problems and limits of aromatics.

Jorge Rojas, general manager at the company, explained that all the weaknesses identified by Honeywell were corrected with the changes proposed by Worley Parsons.

To reach the 19.2% return, Australians suggested making improvements to the distillation columns of the existing structure and, thus, make the most of its refining capacity (25,000 barrels).

It also alters the atmospheric distillation unit and increasing the processing capacity of 5,000 barrels per day. The suggestions have already been endorsed by Honeywell and would be received to obtain the agreement of the Board of Recope.