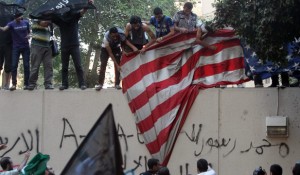 In Cairo, several men scaled the walls of the U.S. Embassy and tore down its American flag, according to CNN producer Mohammed Fahmy, who was on the scene.

The group then clashed with security forces in the city, blocking roads leading to the consulate, witnesses said.

The Libyan government notified the United States that an employee at the U.S. Consulate was killed, a State Department official told CNN.

The State Department does not have independent confirmation of the death, the official said. The nationality of the worker was not immediately known.

In Egypt, police and army personnel formed defensive lines around the U.S. Embassy in an effort to prevent demonstrators from advancing, but not before the protesters affixed a black flag atop a ladder in the American compound.

The black flag, which hangs in full view from inside the complex, is adorned with white characters that read, “There is no God but Allah and Mohammed is his messenger,” an emblem often used by Islamic radicals.

A volley of warning shots were fired as a large crowd gathered around the compound, although it is not clear who fired the shots.

Egyptian groups point to U.S. websites, including YouTube, that have scenes from the film. Some anti-Muslim blogs also have flagged the movie.

In a series of disjointed scenes, filmmakers depict Prophet Mohammed as a child molester, womanizer and ruthless killer.

Most of the Muslim world considers depictions of Mohammed to be blasphemous and deeply offensive.

It was not clear late Tuesday who produced the film and under what auspices. 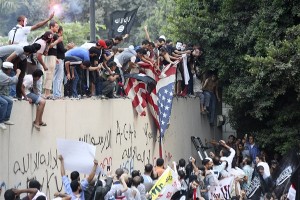 Embassy officials issued a warning to Americans in Egypt, telling them to avoid the demonstrations which “may gather in front of the U.S. Embassy, or Egyptian government buildings such as the People’s Assembly and Ministry of Interior.”

“It is unclear if large numbers will take to the streets, but clashes may occur should two opposing groups come into contact with one another,” the U.S. Embassy said in a statement. “Large gatherings and non-essential travel in and around downtown and Garden City should be avoided this afternoon.”

Frenzied protesters could been seen Tuesday afternoon holding up bits of a shredded American flag to television camera crews while chanting anti-U.S. slogans.

An embassy phone operator told CNN that the compound had been cleared of diplomatic personnel earlier in the day, ahead of the apparent threat, while Egyptian riot police and the army were called in.

“This is an expression of a feeling that is thought to be an insult,” said Nizih El Naggary, a spokesman for the Egyptian Foreign Ministry. “But events like this are extremely deplorable. And we have to work to get things under control.”

The Foreign Ministry issued a statement Tuesday, pledging to protect embassies and warning of the protests’ potentially debilitating effects on the Egyptian economy.

“There are police forces at the demonstrations,” El Naggary said. “They should be protecting the embassy and asking people to leave.”

Mohamed al-Zawahiri — the brother of al Qaeda leader Ayman al-Zawahiri — added, “We called for the peaceful protest joined by different Islamic factions including the Islamic Jihad (and the) Hazem Abu Ismael movement.”

“We were surprised to see the big numbers show up, including the soccer Ultra fans,” he said. “I just want to say, how would the Americans feel if films insulting leading Christian figures like the pope or historical figures like Abraham Lincoln were produced?”

He added that “the film portrays the prophet in a very ugly manner, alluding to topics like sex, which is not acceptable.”

The U.S. Embassy in Cairo announced that it had canceled visa services for Wednesday.

It also said in a statement that it “condemns the continuing efforts by misguided individuals to hurt the religious feelings of Muslims — as we condemn efforts to offend believers of all religions.”

“Respect for religious beliefs is a cornerstone of American democracy,” the statement said. “We firmly reject the actions by those who abuse the universal right of free speech to hurt the religious beliefs of others.”

Demonstrations elicited a mixture of reactions from the Egyptian street, where last year tens of thousands turned out in opposition to former Egyptian President Hosni Mubarak.

This summer, Egypt’s first Islamist president, Mohamed Morsy, was sworn into power at Tahrir Square, the scene of the nation’s revolution in 2011.

Though Tuesday’s embassy protests are the first that Morsy has dealt with, Egypt recently produced similar scenarios when protesters attacked the Israeli and Syrian embassies in unrelated episodes.

“These protests are a bad image for Egypt,” said a Cairo street vendor named Ahmed. “Of course I’m against insulting Islam, but it’s the undereducated, poor people who are out here causing problems.”

“All I want for Egypt is security and stability,” he said. “And as you can see this isn’t it.”

The incident occurred on the 11th anniversary of the 9/11 attacks as crowds gathered across the United States in somber remembrance of a day that left nearly 3,000 people dead.

Tuesday’s focus on the controversial film also drew comparisons to outcry generated from a 2008 movie produced by an anti-Muslim Dutch lawmaker, which then sought to portray Islam as a violent religion.

Geert Wilders’ film “Fitna,” which he released online, featured images of terrorist acts superimposed over verses from the Quran.

A Trackless Path Worth Taking

Canadian Airline to Fly Regularly to Costa Rica in October