Officers of the security forces yesterday seized 369 turtle eggs and seven kilos of turtle meat hidden in the luggage of two passengers on a bus serving between spring La Suerte y Cariari, in the canton of Pococí, Limon . 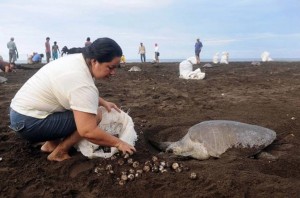 The officers found this after people traveling on the bus alerted a strange cargo.

Both individuals were placed in custody, where they questioned. Those involved were scheduled for Monday will process their case in the Court of Flagrancias.

Protection Act, Conservation and Recovery of Marine Turtle Populations imposes a penalty of three months to two years imprisonment for anyone who trades in products of these species.

Diego Zúñiga, police chief who led the action, said the operation had to deal with 15 tourists aboard the bus and came from Tortuguero, where they were to witness the turtles laying their eggs.