Entertainment News – I do not expect we will see this in Costa Rica anytime soon, unless it can decipher the addresses that make it difficult to find anything. 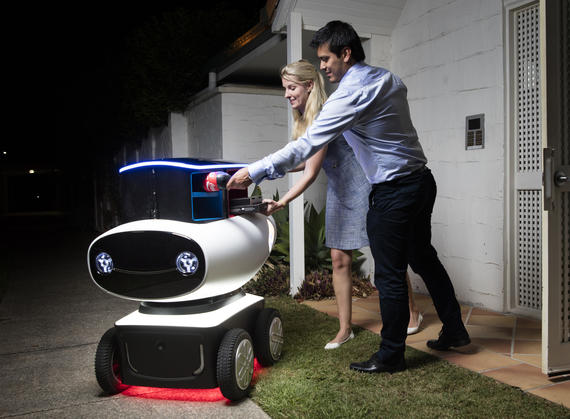 Domino’s New Zealand has introduced the world’s first pizza delivery droid. The three-foot-tall pepperoni purveyor delivers “piping hot meals” and has a “cheeky personality,” said the company. And his appearance is creating something of a stir down under.

Developed in Australia, the “autonomous delivery vehicle” is half Wall-E, half baby carriage, with a sprinkling of R2-D2. Known as DRU (Domino’s Robotic Unit), the robot can hold up to 10 pizzas in a heated compartment that each customer unlocks with a unique code.

DRU can travel on roads and sidewalks, and is armed with a special sensor to detect obstacles such as cars, lampposts, and curious bystanders.

The new delivery bot will make its debut in Wellington, New Zealand’s capital, though “an exact time frame is unknown,” tweeted Domino’s. “It will vary while we work through policy and legislation regarding deployment.”

“Won’t work. It needs to be airborne so hungry Maoris like me won’t eat the contents,” wrote one pizza lover on the company’s Facebook page.

Ultimately, delivering the pizza might not be the biggest challenge for Domino’s delivery droid. As one Twitter user wrote, “Yep, those babies will be held hostage by partying students everywhere.”

Chortling Over the Chortens