World News – In a small city in the typhoon-battered Philippines, what’s left of the town hall has been turned into a field hospital where volunteer surgeons are operating on survivors by flashlight. 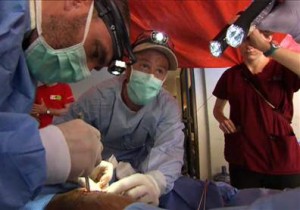 A 16-member team from California-based Mammoth Medical Missions has performed more than 100 surgeries — everything from amputations to a C-section — in three days.

Throngs of the desperate wait outside to be seen amid the smell of rotting flesh and stagnant water.

Inside, the doctors are running low on antibiotics and cutting one dressing into 24 pieces to stretch out their meager supplies. Desks serve as examining tables.

“It’s like war,” one surgeon said. “I’ve never been in a war but this is what I imagine it’s like.”

They are working on virtually no sleep and say Tanauan will need extra help for months.

“I don’t know when or how we are going to be able to leave,” said Dr. Mike Karch. “This is just the beginning of a wave of misery.”

A helicopter trip over Tanauan revealed scenes of devastation worse than those coming out of Tacloban, a larger city 30 miles north.

The countryside is ravaged — an expanse of waterlogged fields and muddy beaches. The streets are filled with mountains of debris, uprooted trees and people looking for help.

An NBC News crew that landed about a mile away was immediately mobbed by about 50 people hoping for food, water and supplies, mistaking the journalists for aid workers.

Across the Philippines, areas devastated by Typhoon Haiyan are reportedly on the verge of anarchy with troops and police struggling to control looting in streets where bodies still remain uncollected.

An international effort to deliver aid is being hampered by roads and airports damaged by the 195 mph winds and massive storm surges that slammed the country five days ago.

The Mammoth Mission doctors — based in Mammoth Lakes in the mountains of central California — were on a five-day trip to Mexico when they were rerouted to Tanauan, which Karch called “ground zero of the typhoon.”

They had to clear water and glass out of the town hall before they could help patients. Since then, they have been working around the clock to remove shrapnel and amputate limbs that could not be saved.

Karch said that as the city lurches toward lawlessness, the surgeons expect to see different injuries.

”This [violence] is part of the epidemiology of a natural disaster,” he said.

“The first few days people are stunned, looking for water and food. But then they get desperate and then comes the violence. We are expecting much more trauma to come in as a result over the next few days.”