Paranormal Pioneers; Beyond the Laws of Nature

Ghosts & the Paranormal – First off, you are probably asking yourself, where in the heck is Cherokee, California? It’s now consumed by Oroville, but at one time it was a thriving town, because of the gold mines and diamond mines. You can get a better insight about Cherokee, by stopping by these two links:
http://en.wikipedia.org/wiki/Cherokee,_California
http://www.ghosttowns.com/states/ca/cherokee.html

When arriving to Cherokee, I discover that these young Cherokee Argonauts were lead from their Indian territory by their New England school master to this area, where they discovered gold in 1850. The town of Cherokee came into existence in 1853. The Welsh miners came and the work began! Cherokee became prosperous and before you knew it, they had a race track, brewery, 17 saloons, 2 churches, 3 lodges, 8 hotels and the population topped out at 1000. Charles Bolton aka Black Bart the Gentleman Bandit frequented some of the saloons at Cherokee. The son of Joaquin Murrieta Carrillo (the inspiration for Zorro) was known to frequent one of the saloons of Cherokee. The very first diamond in California was discovered in Cherokee. This diamond was discovered in 1853. With all of the gold mining, the town gained 15 million dollars in revenue. Not too shabby.

Cherokee gained attention by notables such as President Rutherford B. Hayes and General W.T. Sherman. Both notables came to Cherokee and toured the mines in 1880. W.H. Vanderbilt, Thomas Edison held interests in 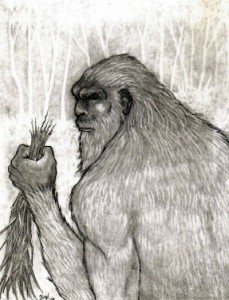 Cherokee. In the area of Cherokee, Brent George captures a female breath type of EVP. There were no females around Brent, when he captured this EVP, he was all by himself in the woods. While in Cherokee, we surveyed the woods for Bigfoot activity and found nothing. Note: I observed the woods and skies with my binoculars. We observed the skies over Cherokee for UFO activity and saw no anomalies in the skies. Wendy and I did observe while on our road trip to Cherokee that Table Mountain has a flat top surface. We also discovered three hills that have a pyramid shape. Why would that be significant? Pyramid structures from our ancient past are located throughout the world. These structures are credited to the sky gods (ancient aliens). Flat top mountains like the one found in Nasca, may have been used as a landing spot for ancient aliens. According to the Sumerian Clay tablets, the Annunaki were mining gold to balance out their ozone layer on their planet Niburu. Scientists confirm that gold dust can correct the ozone layer. Bigfoot that have been sighted are at times sighted at UFO hotspots. Cherokee has all of the ingredients. 1. Gold Mines. 2. Table Top Mountain. 3. Bigfoot activity. 4. Possible pyramid structures near Cherokee.

BIGFOOT AT CHEROKEE
I just discovered this tidbit, and am loving Cherokee CA more and more…The Big Hairy Man Of Cherokee Road On the afternoon of July 12, 1969, Charles Jackson and his son Kevin of Oroville got the shock of their lives here. They were burning rabbit entrails in their backyard, when a huge, apelike creature loped out of the woods and stopped to stare at them. The beast was seven to eight feet tall, had large breasts, and was covered with three-inch-long grey hair except on its hands and face. The Jacksons, only fifteen feet away at the time, said that after it spotted them, it walked up to the outhouse, looked around, and suddenly ran back into the woods. Another Cherokee Road resident had a run-in with the “apeman” around the same time as the Jackson incident. For weeks, Homer Stickley’s farm had been haunted by something that screamed in the woods at night and stole apples from his trees. Then, one moonlit night, Stickley saw the culprit: a tall, hirsute, two-legged creature who walked through a nearby meadow, pausing to stand by a stump. By September, at least a dozen people had reported giant ape-things running around Oroville, but the Cherokee Road sightings remained the most documented and credible of the lot. Six years later, people were still seeing the beasts and finding their huge footprints in the area, but the creatures remained at large. By then, Oroville had established itself as another home of North America’s most famous land monster, Bigfoot.

CHEROKEE CEMETERY:
While exploring Cherokee Cemetery, I discovered the following tombstones. A) Joao Oliveira Died 1907 Native Portugal. B) Masonic tombstones. C) World War II tombstones. D) Jenkin Morgan Died 1900 Native of Wales. E) Recent graves that date to 2012. F) Andrew C. Bligh Died 1879 Native of Ireland. G) C. Metcalf US Soldier Mexican War – Note: While Wendy is near this tombstone, her camera is OFF, but is still recording. During this time, Brent captures a ‘possible’ no EVP and a ‘possible’ yes EVP. Inconclusive EVPs. Where Amy is sitting we capture a DEFINITE ‘no’ EVP when we ask the entity to reveal himself or if he wants to talk. The NO was said by a male entity. Amy captures a sarcastic ‘burp’ sound EVP that is quite loud. No noise was being made when the burp sound EVP was captured. 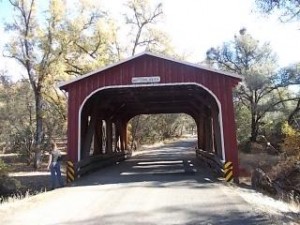 COVERED BRIDGE INTO OREGON CITY AND OREGON CITY SCHOOL HOUSE:
Jim Guyton – Caretaker of the Oregon City School House gave us a nice tour, showing us where the Maidu Indians would grind their acorns into rock stone. Holes can be seen in these large rocks. We learn that John Nishbet opened up the Buffalo Lodge on the opposite side of the school. There is a legend of two Fire-in-the-Hole Ladies of Oregon City that set fire to the local Cat-House, burning it down to the ground, which caused a major fire in Oregon City. These two ladies with their 2 husbands disappeared from Oregon City, never to be seen again. Perhaps they caught their husbands in the Cat-House? The mystery will linger on forever. Wendy Maxam confirms that there were two publicized sightings of Bigfoot in the Cherokee and Oregon City areas, one in the late 1990s and one in 2004. Jim Guyton explains that Ishi the Last Yahi was discovered in this territory. There is so much history and Jim tells us that Franklin Hall was the meeting spot for Oregon City citizens. Oregon Gulch Mining Company dominated this city. In the school house, we capture an EVP of a child crying. Class A EVP and I believe the child crying can be residual energy inside this school house.

OREGON CITY:
Oregon City was settled by a party of Oregonians who came to this location by entering California via the Applegate and Lassen trails. This party was lead by Peter H. Burnett and they arrived at this location in the Autumn of 1848. When they got settled in, they started the town of Oregon City that thrived on gold mining and became the supply center. When the gold dissipated, then the town folded. Legend has it that in the Oregon City Gulch Cemetery, people have made claim of hearing people talking. In the nearby hills, people have heard Maidu Indians chanting and dancing. In the school, kids were known to find their own switch if they were bad and they received a good ‘switching’, perhaps that is why we captured a child crying inside the school house. We were shown the outhouses. The outhouses reminded me of the outhouses in Seoul, Korea, except these outhouses did not smell of Kimchi. When I had to use a outhouse in Korea, they all smelled like Kimchi and I swear I would see snake like creatures swimming in the brown goo.

TREE WALKER
John Laurel on my Facebook says the following: “Paul, I am from Oroville and I wish I could go on this scouting mission with you and your team. In the woods near Cherokee, we saw the damnest thing. We call this ghost the ‘Tree Walker’. My buddy Brian tagged this ghost with this name, because we went out to the same woods three more times to see if we could find the Tree Walker, we only saw him once. The Tree Walker was translucent, you could see right through him. He wore a trench coat and a black derby styled hat. While we watched him, he walked right through a tree and vanished before our eyes. We were scared as all —— and ran like the dickens. After our fear was gone, we went back to the same area with more friends to see if we could find the Tree Walker again. What do you think? MY ANSWER: It makes sense, if Tree Walker is from the 1800s, there was no big tree there, the tree most likely would have been a seedling and he would be able to walk that path, you probably saw residual energy of a man that was walking a trail where that tree has now fully grown. CASE EXAMPLE: Entity is walking 6 inches above the floor level. It is later discovered that the floor at one time was 6 inches above what the floor level is now. Type: Residual.

Are You Training Yourself to Fail?