Ghosts & the Supernatural – I recently received a phone call from Rita Montoya of San Mateo. Rita says that when she was driving near Telegraph Hill in San Francisco, she saw the ghost of a woman with her head tilted to one side, as if it had been partially severed. Rita says that the image was quite disturbing and at first she thought it was a gag, that someone had created a pre-Halloween costume, then she noticed that this strange figure was somewhat transparent. As she watched the apparition for two minutes, the apparition simply dissipated.

I thought this was quite an odd call and I started wondering if there was a murder in San Francisco near this area, where a woman may have been partially decapitated. As I searched various crime data bases, I learned that a couple, a professor and his wife were driving through the industrial section of San Francisco in the wee hours during the fall of 1973, when they came upon a man staggering out of the shadows towards them.

The couple thought nothing of it, they merely thought he was another skid-row drunk. The street was illuminated by sparse and dim yellow streetlights, but even though the lights were dim, they noticed that the man had his hands tied behind his back. 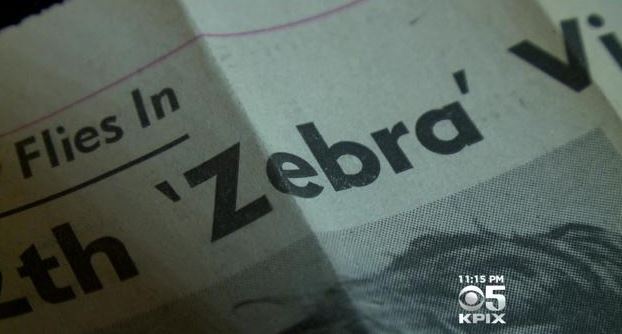 The professor learns at a later time, that someone actually did hack his face with a machete!

The man with his hands tied behind his back was Richard Hague. A few hours before, Richard and his wife Quita were taking an after-dinner stroll around their neighborhood. A van pulled up and men in black ski masks forced them into a white van. The men in the van sexually molested Quita ,then they slashed her throat with a machete, nearly decapitating her. After Quita was attacked, then it was her husband’s turn. The machete was used over and over again, as it made contact with Richard’s head. Presuming Richard was dead, the men dumped him off the side of the road. Richard was not dead. The minutes that Richard walked the streets in his bloody condition, it would seem like an eternity. Richard Hague and Quita were the first victims of what was later known as the Zebra Killings. The Zebra Killers received their moniker from the San Francisco Police Department. The police would dedicate the Z radio frequency for anything relating to the Zebra killings. During the killings, the residents of San Francisco felt like they were in a vice grip, the terror of these killings was unimaginable. If the insane Colonel Walter E. Kurtz (Marlon Brando) of Apocalypse Now were to witness these murders….the words would simply flow out….”the horror, the horror”.

I can now only wonder if Rita saw the ghost of Quita? Could it be that Quita still wanders the streets of San Francisco with her head tilted to one side from a machete cut? Her death was so quick, so sudden. She probably still seeks answers to why she was brutally murdered. Rita, my team will be headed for San Francisco on October 9, 2010, Saturday, we will be working a demonic case. If we have time, we will see what we can find on Telegraph Hill. Perhaps Quita needs to find her way to the light.

Why You Should Have Marchamo on Your Vehicle in Costa Rica?