World News – Every year on Sept. 11, Elizabeth Stringer Keefe has done the same thing: She shares a wedding photo that was discovered at Ground Zero, hoping someone online will be able to identify the people in the picture. This week, 13 years after her quest began, she finally got a response — and it couldn’t be a happier ending. 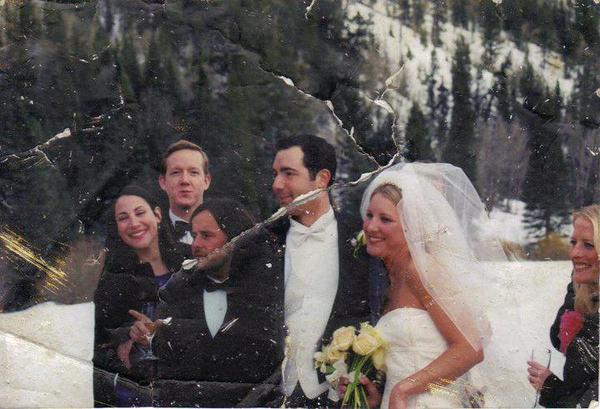 Keefe found herself in possession of the photo just a few weeks after Sept. 11, 2001, while visiting a friend in Manhattan. Keefe’s friend who found the photo at Ground Zero was moving to California, and passed it along to Keefe, asking her to “do something meaningful with it.”

And so every year, Keefe brought the photo out, to share on social media, asking if anyone knew the bride with the yellow roses, the groom with the white bow tie, or the people in attendance.

“9/11 was a traumatic event for everyone, but there’s no description for the horrors that the people who worked in the World Trade Center and the area experienced,” Keefe said to TODAY. “If the photo was connected, I wanted to do just one small thing to bring some comfort.”

For the past few years, when Keefe shared the photo, it gained a handful of comments on Facebook and a few retweets on Twitter. But this Sept. 11, the photo went viral, with over 40,000 people sharing the photo by the next day. “I was in disbelief,” Keefe said. “I stayed up until 4 a.m. watching it go viral.”

The widespread sharing worked, and Colorado resident Fred Mahe found the photo online. Mahe is the man to the far left in the photo, from a wedding he attended in Aspen. On 9/11, the photo was on Mahe’s desk on the 77th floor of the World Trade Center. Mahe himself wasn’t in his office on the day of the attacks.

@ProfKeefe I KNOW THE PEOPLE IN THE PICTURE! I was at the wedding.

“That kind of exposure was incredible, and certainly helped to bring us together,” Keefe said.

Keefe and Mahe spoke on the phone Friday night, connecting over the photo that, for the two of them, now represents so much more than the picturesque wedding by a snowy mountain. “It was very overwhelming,” Keefe said.

After talking to Mahe, Keef announced that all the people in the photograph were alive and well.

As for the photo, Keefe said it will be properly returned to Mahe in person. “Fred and I will reconnect in New York for me to return it to him,” she said.

But Keefe says the photo wouldn’t have been a success without everyone on social media rallying together.

“The outpouring of support from the online community is what made this work,” Keefe said. “Small acts of kindness can have a very big impact.”

Costa Rica Independence Day; Know Where You Can Buy Alcohol