Over 200 Bodies on Mount Everest Used as Landmarks

Ever wonder what happens to your body if you die climbing Mount Everest? You become a landmark until the end of time, which could be December 21st, who knows.

More than 200 people have died in their attempt to scale Mount Everest. The mountain offers seemingly endless options 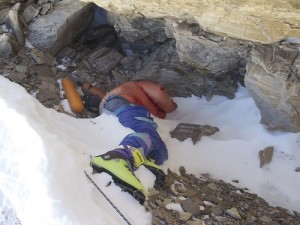 for kicking the bucket, from falling into the abyss to suffocating from lack of oxygen to being smashed by raining boulders. Yet climbers continue to try their skills – and luck – in tackling Everest, despite the obvious dangers. Indeed, the living pass the frozen, preserved dead along Everest’s routes so often that many bodies have earned nicknames and serve as trail markers. Here are a few of the more colorful tales, adapted from Altered Dimensions: