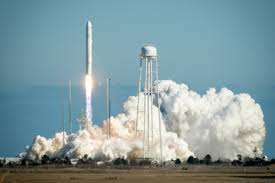 The rocket lifted off at 5 p.m. ET Sunday and achieved orbit smoothly. It launched an 8,400-pound mock Cygnus supply ship into orbit about 158 miles above Earth.

Antares is a medium-class, two-stage, 13-storey rocket designed to carry payloads of up to 6,500 kg (14,329 pounds). Along with SpaceX, Orbital was awarded a Commercial Orbital Transportation Services (COTS) contract to resupply the ISS.
The successful test launch means Orbital will start ferrying goods to the space station, becoming the second private company to do so after SpaceX.

While heading for an orbital velocity of more than 16,000 mph, Antares rocket didn’t quite leap off the launchpad at blazing speeds because its first stage is strictly liquid.

Following a smooth liftoff, it was flying at about 7,200 mph at stage one separation. At an altitude of 117 miles and speed of 9,400 mph, stage 2 ignition took place followed by several minutes of powered flight.

About 10 minutes after liftoff at an altitude of 158 miles, the simulated cargo ship was released into orbit, triggering applause in the mission control room.

The test launch also deployed three PhoneSat nanosatellites nicknamed Alexander, Graham, and Bell, that feature smartphone technologies including a Google Nexus One. They’re designed to be some of the cheapest, easiest to build satellites ever put into orbit.

The next Antares launch, slated for June or July, will carry a real Cygnus supply vessel to dock with the ISS. We’ll see whether that will go as smoothly as today’s flight.

Obama is Not The 1st President to Costa Rica