Costa Rica News – Someone please explain this to me? Costa Rica has the chinese come in and build them a state of the art, modern national stadium and Costa Rica wants to move its World Cup Qualifying match against the USA to the old, smaller Saprissa Stadium? 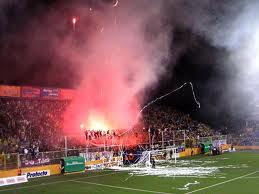 Are they still pissed of about the snow game and think that playing the game in what is in essence a small college stadium is going to punish the USA? Perhaps they want to have it so there is less security so if they lose they can jump the fences onto the field?

You are a brand new stadium and home field advantage is determined basically by the fans in the World Cup games. All fields are the same.  There are more seats at the national stadium and more people can enjoy the game.  Let’s expose the truth the only reason the Ticos want it held here is to literally throw shit at the US players. FIFA should decline this request.

I know that I would not go to the game if it was being held in that stadium, I would not leave alive. Plus the players of the US team would be bombarded by fecal matter.

The National Stadium in the capital San Jose opened in 2011, while Saprissa is an aging stadium with artificial turf. At Saprissa, the fans are right behind the benches.

When it comes to the projectiles thrown at the opposition, little imagination is necessary. They items include bags of human waste and other charming items. 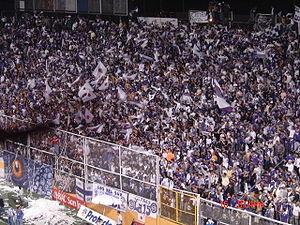 “The voice of the people is the voice of God, and if people want us to play there, we will play in the Saprissa against the United States,” Li said in an interview with the radio station Radio Rican DNA.

No one at the federation immediately responded to calls from The Associated Press seeking comment.

FIFA would have to approve the change in venue.

Li said Club Saprissa President Juan Carlos Rojas was willing to make the necessary arrangements at the stadium to host the match.

“I would not want to say anything else about the possibility of holding other matches there, but if we play at the Saprissa, we have to have the right conditions and that’s what I told Mr. Juan Carlos Rojas,” Li said.

The possible change of venue comes after Costa Rica lost 1-0 in its recent visit to the United States, a game played in heavy snow in Colorado. Costa Rica filed a complaint with FIFA about the field’s conditions, but the complaint was dismissed.

Before facing the United States, Costa Rica hosts Honduras on June 7. Four days later, it will visit Mexico and then it will play Panama in a home game on June 18.

Who Should Live in Costa Rica?

Andrea Canales >
INSIDE SOCCER
The U.S.’ personal house of horrors

Story Highlights
Costa Rica’s Saprissa Stadium has become house of horror for U.S. national team
The Americans have never won at Saprissa in six tries; they visit on Wednesday
U.S. leads CONCACAF’s final round of World Cup qualifying with 7 pts. in 3 games

Costa Rica manhandled Tim Howard (bottom) and a young U.S. team 3-0 the last time they met at Saprissa Stadium in October of 2005.
AP

To most, the term “Purple Monster” may conjure up demented nightmares of Barney the dinosaur. But to veterans of the U.S. national team, it’s the unforgettable nickname of Ricardo Saprissa Stadium in San José, Costa Rica, a nightmare of a venue Americans can’t forget. And on Wednesday, when the U.S. visits as the final round of CONCACAF World Cup qualifying rolls on, they’ll be reminded why Saprissa is such a house of horrors.

No other field in CONCACAF throws the U.S. team into such a state — specifically a losing one. The U.S. has never won there in six games, nor has it even gained so much as a point at any stage of World Cup qualifying. The one draw the Americans managed in Costa Rica was when they played in another stadium in nearby Alajuela. Los Ticos quickly learned to stick to their trump card, though, and all qualifying games since then have taken place at Saprissa.

Unlike Mexico City’s legendary Estadio Azteca (where the U.S. actually has claimed a point in qualifying), the tremendous difficulty of getting a good result in Saprissa isn’t immediately obvious. There are no smog or altitude issues, and at only 24,000 capacity, the stadium isn’t even a fourth the size of the Azteca.

But Costa Rica’s fervent fans turn the stands into a roiling mass of humanity that breathes down the neck of all those on the field. They chant, sing, pound drums and dance to encourage their nation along. They are also ruthless in any believed slight by the referee on close calls.

“The way the stadium is, the fans are right on top of you,” said former U.S. national-team coach Bruce Arena. “That’s intimidating for players, of course, but even more for officials.”

Arena’s vehement arguing against a handball call made by referee Peter Prendergast against defender Gregg Berhalter in 2000 led to a multiple-game suspension for the coach.

The passing of time may have mellowed Arena somewhat, as the current Galaxy coach looked back and expressed a certain understanding of the burden officials face. “In the old days, the security was nonexistent, almost,” Arena said. “It was very tough to get any close call when clearly the officials didn’t feel safe.”

Berhalter had a similar take when he recalled the incident. “They were going nuts and the referee was a bit nervous for his life, maybe. He made up a call.”

In Arena’s day, the stadium actually boasted a grass field, but Costa Rica’s rainy season wrecked havoc on it. “A very bad field is worse than a good turf field,” said Arena. “That old field was just horrible. They’d get these late-afternoon rains and it would turn into a pit. The heat is also a factor.”

The criticisms didn’t end there. “The visiting locker rooms, it was as if they’d start preparing them a year in advance — they’d be filthy,” Arena continued. “I leave it to your imagination what can accumulate in that sort of environment. The smell was terrible.”

Whatever worked up by the ardent Ticos fans has been successful. Costa Rica manhandled a rather young U.S. team in its last World Cup qualifying contest, winning 3-0 in October ’05 (though the Americans already had clinched qualification for the ’06 World Cup).

FIFA, however, has had to take action against overzealous fans who have thrown objects at the players during matches. Security has increased, but the incidents served to add to the legacy of the pit.

Berhalter had a few words for outsiders who insist that CONCACAF qualifying is a joke. “Go down there and play,” said the Galaxy defender. “The Germans, first of all, they’d die of the heat. Second of all, the antics going on would drive them crazy. The fire alarms in the middle of the night, the radio stations blaring in front of your hotel. The 12 o’clock kickoff in the middle of July. That stuff, they wouldn’t deal with that. The sandwiches, the rocks, the batteries.”

Though he didn’t play in the 3-0 loss, Landon Donovan did dread a return trip to Costa Rica. “Saprissa feels like the most difficult place to play.” said Donovan, pointing out events off the ball. “In Salvador, they’re a ways away, and even in Azteca, it is a ways away. You can feel it, you can hear the fans right there. It makes it tougher.”

Costa Rica is one of only two CONCACAF countries that has a positive overall goal ratio against the U.S. It would be a tough team to compete against anywhere, let alone at the toughest venue in the region.

“They’re a solid team,” Donovan said. “There’s pressure for them to win at home. If we get four or six points out of these next two games, we’re very nearly qualified. So that’s our goal in these two games.

Even though Saprissa will not suit up and take the field, the stadium itself gives Costa Rican players extra confidence. The U.S., which may have overlooked los Ticos in the past due to the constant focus on beating Mexico, now faces an opportunity to make history.

The Azteca may get more attention as a horrific venue for visiting squads, but the record shows that Saprissa is a real beast. Donovan is ready for the challenge of winning in the legendary stadium, pointing out that young players on the U.S. team should have learned from the first few matches of qualifying, where in one game, the U.S. trailed by two goals before storming back to equalize.

“El Salvador was a good test,” Donovan noted. “It was a wake-up call and now I think those guys know what to expect. It’s never easy.”

P.S.
Above column by Andrea Canales originally published 9/01/2009 on SI.com

Understood, but are they going to play every team there? Or can national teams just chose whatever stadium they want for whatever team they want? Isn’t that why you built the national stadium so more people can see games and to have a state of the art facility? And now back to a stadium where people throw bags of pee and shit at the players? I would not want to play there either, but Ticos think it is the stadium….No, it is the fans acting like complete jack asses with ZERO class.