No idea why this is news as it happens each and every day in Costa Rica.  However, the public has been told to report it so that means that it might stop for about 6 to 8 minutes.  Honestly, paying off the cops is so much easier than having to deal with the fines which have gotten out of control and the Costa Rican court system which makes you in itself want to just leave the country. 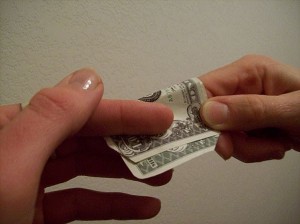 Agents of the Judicial Investigation Organization (OIJ) arrested them last night as suspects of traffic officers that were collecting fines from drivers but putting them in their pockets.

The official names Palma and Dondi working in the field in Siquirres were captured with marked bills.

Apparently the traffic police charged the employees  of a company in the area, and it was the owner of the company who filed the complaint with the OIJ days ago.

Diego Herrera, director of the Transit Police, said the charge happened frequently and urged the public to report such situations.

“What use is that the officers were paid to employees of a project that carried fuel for machinery in pick-ups.

“This is forbidden, and in addition to a fine article indicates that the plates must be raised,” said Herrera.

“It’s good that the user report this type of events, it helps us clean the Traffic Police who raid road,” he added.

The officers detained in the cells of the OIJ in Siquirres and tomorrow will be transferred to the Public Ministry.

The Observer Is the Habit of Psychological Separation

Your right nothing will change. A few get caught then quietly after a 3 month vacation with pay are back out working again. Costa Rica business as usual. Right! Lady Laura?