OIJ: Crooks are Happy about the Budget Cut to Police

San Jose, Costa Rica – The intended cut in the Judicial Investigation Agency (OIJ) budget is making criminals “happy”, said Jorge Rojas, director of that OIJ.  He made this assertion by claiming that the Ministry of Finance has now projected a 4% increase in OIJ funds for next year, when the institution was meant have a 9% increase. 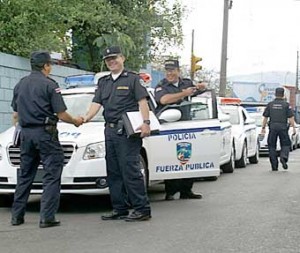 “This year we are already complicated to operate with different cuts to which we submitted (…) The crop of 2013 is to grow to 60% less than we estimated,” said Rojas.

“This is very attractive to the offender (s) due to the fact funds have been removed from the Police resources to combat crime. Blessed are the criminals, but sad, I think, for police and decent people, who are expecting more and more responsive to the police, “said the chief.

OIJ  argued that the measure is inconsistent with “the speech that tells the country, that the police will have more operating capacity.”

Rojas gave these remarks yesterday during a press conference in which gave details of an operation to arrest eight kidnappers.

The OIJ chief took the opportunity to point out that police work of this magnitude would be affected by the budget reduction.

According to Rojas, the limited resources affect the investigations that are ongoing at the institution.

He added that the money not be enough to feed prisoners in court the cells.

On the day before yesterday, Attorney General of the Republic also complained of decreased resources to the prosecution.

The head of that body requested the Government to consider that many corruption cases have come forward in the last days and the small number of prosecutors for investigating them.

According to Chavarria, at this time each of the six anti-corruption prosecutors have an average of 32 cases of high complexity.

Among these investigations, the prosecution said is the case of border trail Juan Rafael Mora Porras, whose inquiry began this month.

Other issues are the granting of the mining project Crucitas in San Carlos Cutris, the issue of the road to Caldera, the donation of funds from the Central American Bank for Economic Integration (CABEI), the bid made by the Costa Rican Oil Refinery (Recope) with the company processes, abnormalities in the Regional Development Board of the Southern Zone (Judesur) and criminal proceedings against mayors.

For his part, President of the Supreme Court, Luis Paulino Mora, said yesterday he hoped, to discuss the budget of 2013, the Ministry of Finance and the congress would allow the judiciary to grow.