A child a year and eight months died yesterday afternoon after being hit by an order of the Judicial Investigation Organization (OIJ).  The accident happened at about 5 p. m in the La Trinidad Pococí Roxana, in the province of Limon. 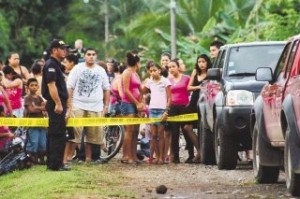 According to those who witnessed the incident, all was due to an oversight of those who cared for the child.

“It was an accident, the child’s parents were unaware that the child crawled under the car while they talked with the agents.

“When the agent started, child crushed his head with the rear tires,” said Maria Elena Chacón, who tried to help the child.

The site went a unit of Red Cross Guápiles, Pococí, but a serious head injury took her life the child immediately.

According to Chacon, the child was the only child of a young couple.

The child’s mother was taken to hospital Guápiles product of a nervous breakdown.

At the site, near Aunt Tere School, took the intervention of the security forces because several neighbors tried to attack the OIJ officials traveling in the vehicle.

To calm things down was necessary the presence of 15 policemen.

The lifting of the small body was carried out by agents of the Judicial Investigation Organization (OIJ) of San Jose. Furthermore, collected information about what happened.

Last Saturday was a minor hit on the coastal road in Osa. The victim was taken to the National Children’s Hospital, where he died yesterday.

88 Books that Shaped America, at the Library of Congress